The Original Series, Boldly Go No. 1

Months after the events of Star Trek Beyond, the crew of the U.S.S. Enterprise have been re-assigned to new ships and new roles. Some have chosen to spend time away from Starfleet. Others have embarked on new opportunities. The Galaxy enjoys a fragile peace. It will not last.

Some months following the events surrounding Altamid, the bridge crew of the USS Endeavour discuss their interim captain: James T. Kirk. After making sure all bridge systems and personnel are running smoothly, Kirk makes a general announcement to the ship, but his optimism is not shared by Doctor Leonard McCoy, who has temporarily accepted a lower rank to serve on the Endeavour and has begun to chafe under the ship's chief medical officer, a Tellarite known as Groffus.

Across the galaxy on New Vulcan, Spock and Nyota Uhura have settled in with Sarek for a year long sabbatical while Montgomery Scott has signed on as an instructor at Starfleet Academy. Hikaru Sulu meanwhile has received a promotion and has been made first officer of the USS Concord, commanded by Captain Clark Terrell, on a six-month deep-space survey. Before the ship can properly head out however, an unidentified starship approaches and begins transmitting an indecipherable message.

On the Endeavour, Kirk, McCoy and Pavel Chekov discuss their new environment and crew before Kirk is called to the bridge by first officer Valas, the only Romulan in Starfleet. Arriving, Kirk is briefed on the Concord's transmission of a distress signal on the border of the Delta Quadrant. Hearing the same transmission, Kirk orders it forwarded to New Vulcan in the hopes Uhura can decipher it while the Endeavour warps off to help the Concord. On New Vulcan however, Uhura cannot make sense of the message either.

Arriving at the Concord's last reported coordinates, the Endeavour discovers a broken wreck. After what few survivors are beamed aboard the Endeavour, one of them briefs Kirk on the battle before McCoy enters with a wounded Sulu. Before losing consciousness however, Sulu is able to impart the words of their attacker, at the same time that Uhura manages to decode the message: "Resistance is futile". 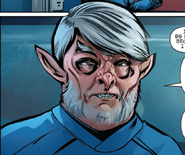 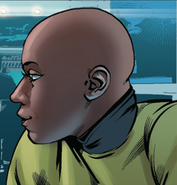 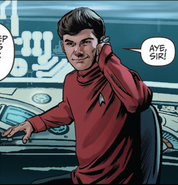 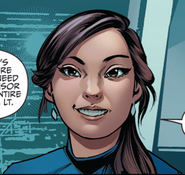