The feathered and fearless space pirate EURYDICE returns to tempt Captain Kirk and the crew of the Endeavour with a daring plan to uncover secrets that could change the fate of the galaxy!
Don’t miss the latest chapter of the hit series set after the events of STAR TREK BEYOND!

Following the events of STAR TREK BEYOND, Captain Kirk has been assigned to temporary duty aboard the U.S.S. Endeavour, joined by McCoy and Sulu, the latter having been promoted to first officer. While they wait for the new Enterprise to be built, they continue on their mission to explore strange new worlds...

2251 , in orbit above the planet Axanar. The USS Heisenberg, commanded by the famous Garth of Izar, is beset by Klingon warships. Though all hope seems lost, Garth executes the daring Cochrane Deceleration allowing the Heisenberg to claim victory. Though Jiang offers praise to his captain, Garth can only hope they haven't started a war.

2256 , Garth addresses a group of cadets at Starfleet Academy. As it turns out, those actions prevented a war. But the mission taught Garth that peace is a fragile thing that must be fought for, not a shield to hide from the Klingons behind, the speech resonates with one James T. Kirk. After the class, Pike introduces Garth to Kirk. Garth downplays his own success in light of those of Kirk's father, whom Garth is sure would be proud to know of his son joining Starfleet. Garth queries Kirk of his goals who reveals that, despite his penchant for machinery and repairs, he plans to pursue a command post. Garth readily approves and Kirk asks for a cadet spot on the Heisenberg before Pike leads Garth away. In private, Garth asks why Pike was given the new flagship and not him. That is simple. Garth is needed to save the galaxy.

2260 , in orbit above Antos IV. Garth is preparing to beam down to meet with the Antosian representatives but something goes wrong in the transport and Garth materializes inside out. The transporter chief sadly says Garth is gone.

2263 , Kirk has grown quite acclimated to the USS Endeavour to such an extent that he must consciously remind himself that his time as her captain is limited. Presently, Ellix approaches the captain with fascinating phytobiological data gathered from the planetary survey before Murcia detects the approach of an unidentified vessel that hails the Endeavour. The viewer flares to life to reveal the unexpected visage of Thalia who wants Kirk's help to find her mother on Antos IV. Though concerned about classified Starfleet intelligence being sold on black markets, Kirk orders the Endeavour to follow the Spectral.

Mid-warp, McCoy and Kirk discuss Garth's last trip to Antos IV with Kirk pointedly telling his doctor to have some respect and not bring up his long fear of transporters. As it turns out, McCoy's concern is about going in blind, reminding Kirk of the last time they crossed paths with Eurydice and Thalia. Though the fact they the Enterprise crew were lied to, given false hope and sold off to an interstellar crime syndicate had crossed Kirk's mind, Eurydice did it to save her daughter. But nonetheless, Kirk will be keeping his eyes open this time.

In orbit of Antos IV, Kirk communicates with Xegh-Ky saying he does not speak for the Federation and is merely helping a friend. The delegate grants access and offers to aid them. In the capitol city, Xegh and Kirk discuss Antos joining the Federation. Though it would be be huge boon to Antos' trade and economy, some Antosians feel Starfleet is too quick to embrace violence. Before the discussion can continue, Eurydice shows up. Thalia however runs off, claiming Eurydice is not her mother. Kirk and Eurydice run after the girl, cutting into an alley. As Kirk looks around for Thalia, Eurydice says his father would be proud before stunning him.

Kirk beams aboard the Endeavour claiming that everything was nicely wrapped up. After giving Sulu instructions, Kirk walks off to his ready room...which Sulu reminds him is in the other direction.

In the darkened ready room, the captain sits down. Declaring that it's good to be back, his features morph into those of Captain Garth! 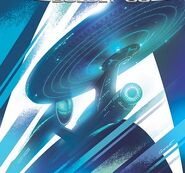 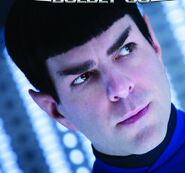