Captain Kirk and the crew of the USS Endeavour encounter a new threat to the Federation, but one very familiar to Trek fans. Meanwhile, Spock and Uhura face an uncertain future on New Vulcan.

Months after the events of Star Trek Beyond, the crew of USS Enterprise has been re-assigned to new ships and new roles. Responding to a distress call from the USS Concord, Captain Kirk and the USS Endeavour arrive to find the ship in pieces. A few survivors are rescued, including the Concord's first officer, Hikaru Sulu. The attackers had only one message: "Resistance is futile".

In the sickbay of the USS Endeavour, Hikaru Sulu recaps the attack on the USS Concord, despairing that the theft of the primary hull means his husband and daughter are prisoners of the Borg. Though Valas advises to wait for reinforcements, James T. Kirk feels that time is of the essence and orders a communication buoy left behind while the Endeavour pursues the Borg. On New Vulcan, Nyota Uhura has found an unlikely match to the Endeavour's audio file within the Vulcan archives from a Vulcan ship that disappeared centuries prior on the edge of the Delta Quadrant.

The bridge crew of the Endeavour tracks the Borg ship's course finding it came to a halt where the USS Kelvin was destroyed. Though Ellix finds no evidence of time travel, she notes the power displayed by the Borg is on par with the Narada. The Borg ship suddenly changes course for Romulus prompting to Kirk to order the ship into action so they can catch the Borg before they come to the Romulan Neutral Zone. On New Vulcan, Uhura and Spock speak to the Council regarding being loaned a ship. Spock convinces them to approve their request by highlighting that loaning a ship to aid the United Federation of Planets will be viewed as proof of Vulcan commitment to the Federation and aid them in investigating a potential threat to the Vulcan people.

Aboard the Endeavour, Murcia picks up a distress signal from Outpost Armstrong on the edge of the Neutral Zone. Dropping out of warp speed, Kirk orders a yellow alert before the sight of a Borg sphere deploying its tractor beams on the colony prompts a red alert. The Endeavour fires torpedos at the tractor beam emitters, disabling them while Ellix and Murcia detect pieces of both the Concord hull and crew within the sphere. Before another attack can be fired, the Borg beam over an assimilated Clark Terrell to deliver a warning before the sphere warps off on-course to Romulus. Though Kirk is eager to follow, Valas convinces him that direct pursuit could potentially incite a war and that the outpost survivors require medical aid. Kirk capitulates to her logic but promises that after aiding the outpost, they will resume their pursuit.

A distress call is received.

The Endeavour arrives at the Armstrong colony.

The Endeavour confronts the Borg over Federation Outpost Armstrong. 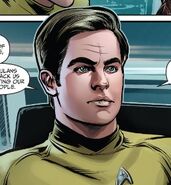 A tractor beam ensnares the Concord.

USS Concord cut into pieces by the Borg.