The Original Series: Boldly Go No. 3

The hit new ongoing STAR TREK series continues as Captain Kirk and the crew of the U.S.S. Endeavour face an enemy unlike any they’ve faced before… but an enemy all-too-familiar to STAR TREK fans!

The Borg have arrived. Their first encounter with Starfleet ended in the destruction of the U.S.S. Concord and the capture of most of its crew, including Captain Clark Terrell. The U.S.S. Endeavour, captained by James T. Kirk, arrived to rescue survivors but was warned by the Borg not to interfere. The Borg sphere then departed on a course for Romulan space...

Within Romulan space, ten light years from the Neutral Zone border, the Borg sphere destroys a Romulan fleet as punishment for failing to provide "The Outlier". On the Federation side of the Zone, the USS Endeavour waits for word from their superiors only for Valas to theorize that the Borg destroyed the subspace relays. Just as James T. Kirk is about to order the ship into the Neutral Zone, Spock and Nyota Uhura arrive in their Vulcan spacecraft. Though far from ideal circumstances from a reunion, the Endeavour soon warps off in pursuit of the Borg.

On Quirina VI, two Romulans attempt to make sense of the last messages sent by the destroyed fleet before the Borg sphere arrives and commences an orbital bombardment. Aboard the Endeavour, Spock and Valas have discovered the Borg ships function as a unified whole meaning there are no critical systems to be targeted. When asked what the Borg desire, Spock reveals his hypothesis that they are in fact searching for the Narada. By comparing scans of the Narada to scans of the sphere, Spock and Uhura have found that the ships "speak the same language" before they further theorize that the Borg detected the arrival of the Narada in their timeline but unable to find the craft, they are attacking the Romulans in an attempt to discover how the craft was built.

On Quirina VI, the Borg continue to assimilate Romulans before they discover the blueprints of the Narada and demand the Romulans explain how the craft was built. Upon the Endeavour's arrival, Ellix attempts to beam the Concord survivors aboard but fails to break through the sphere's shields. Detecting Clark Terrell's lifesign on the surface, Kirk leads an away team (with the addition of Spock) to confront the Borg.

The Romulans desperately attempt to explain the Narada's origins to the Borg before the Endeavour crews beams in. When Kirk orders an attack however, it is revealed the Borg has adapted to Starfleet phasers. The following fight is both short and one-sided with an Andorian ensign perishing and Borg nanoprobes being injected into Spock. Valas only just manages to save Kirk from sharing the latter's fate and the survivors of the away team are beamed back to the Endeavour where Kirk can only offer an apology to Uhura.

The Borg attacks the Romulan world of Quirina VI 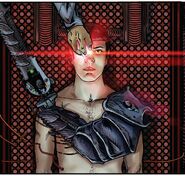 Spock is being assimilated by the Borg 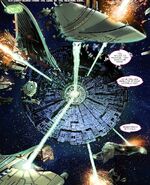 The Borg is attacking a Romulan armada