Captain's log, stardate 2263.125
It's been a month since we embarked on a new survey mission to the edge of the quadrant.
The crew has taken to Commander Sulu just as I knew they would.
Commander Valas is greatly missed, but we could not have a better officer to stand in her stead.
Commander Spock and Lt. Uhura have returned to assist with the growth of colony on New Vulcan until construction of the new Enterprise is complete.
In the meantime, there's plenty of space waiting to be explored. 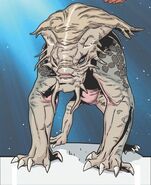 Teenaxi
Add a photo to this gallery

Retrieved from "https://memory-beta.fandom.com/wiki/Boldly_Go,_Issue_6?oldid=567581"
Community content is available under CC-BY-SA unless otherwise noted.