Boldly Go, Issue 7 was the untitled seventh issue of IDW Publishing's Boldly Go comics. The issue was written by Mike Johnson & Ryan Parrott. Issue art was by Megan Levens, with colors by Sarah Stern, lettering by AndWorld Design, and edited by Sarah Gaydos.

Captain's log, supplemental
After the Borg incursion into Romulan space, and thanks to the critical role played by the Endeavour in destroying the threat, the Romulans have agreed to meet with the assembled worlds of the Federation here on Babel. The goal is to convince the Romulans that our mutual survival depends on working together in the future… and on a personal note, it will be good to meet with Vulcan delegation to the conference… a delegation of old friends.

Aboard the USS Endeavour, Montgomery Scott briefs a group of cadets on the heavy responsibility of representing Starfleet at the upcoming Babel Conference before James T. Kirk enters. After congratulating the cadets for rescuing the Slayton and greeting Jaylah, Kirk introduces the Andorian ambassador, the father of cadet Shev Akria who requests a word with his son. The following conversation however is harsh and cold with Shev's father warning that if Shev embarrasses him (and therefore Andor) at the conference, then he will be returning home to be reeducated in Andorian customs.

On the surface of Babel, Kirk and Leonard McCoy reunite with Sarek, Spock and Nyota Uhura, representing the Vulcan people. Though Spock is healing well from his Borg inflicted injuries, the same cannot be said for Captain Craig Terrell who retains deep emotional scars. Terrell's speech to the ambassadors is short and to the point: The Borg do not care about treaties, borders or sovereignty. They do not view they the United Federation of Planets or the Romulan Star Empire as equals. They view individuality as a weakness and therefore have no interest in peaceful coexistence in spite of their great power. Though Kirk praises the speech, Terrell is unconvinced of its effectiveness given how every species is clustering together. Indeed, the only ones speaking to other races are the Starfleet cadets. As Shev voices his distrust of the Romulans, he is suddenly approached from behind by their ambassador Joltair. Before he can say anything that might harm relations he is sent away by Kirk. Though Joltair offers Kirk thanks, Kirk has no love for the Romulans so long as they keep Valas prisoner. An opportune time for Joltair to reveal that Valas is now a loyal servant of the Romulan Empire. Valas confirms as much and promptly resigns from Starfleet before the Romulans walk off.

Joltair gives his speech recapping the long feud between the two governments before he suddenly collapses on his podium and dies. Hours later, Sarek informs Kirk that as a result of Joltair's death, the Romulans are threatening to leave the conference. McCoy unfortunately has no good news, his scans showing that the ambassador was poisoned. The data is supported by the Romulan Pilok who denies the offer of Federation assistance in solving the murder. As the Federation party leaves, Hikaru Sulu calls to inform Kirk that the Endeavour has picked up a craft fleeing the conference. Leaving the investigation to his friends, Kirk beams aboard to chase down the rogue ship.

The cadets discuss theories about the ambassador's death before Starfleet guards arrive to detain Shev, not at his father's request but rather for questioning in the murder. The decision is protested by Spock and McCoy but Pilok is immovable, demanding that Shev be turned over lest the Romulans leave. In his cell, Shev begs his father for help but finds no sympathy. T'Laan's own attempts to deter Spock from surrendering Shev are equally unsuccessful. Meanwhile, the Endeavour drops out of warp on the edge of an asteroid field where they detect escape pods detaching.

Shev has been driven to prayer, begging for some sort of miracle. As if in response, the forcefield deactivates and Jaylah steps forth to free him.

Babel (the galaxy's Alpha or Beta Quadrant)
Referenced only
Romulus 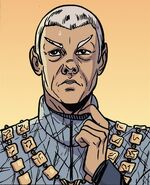 Ambassador Joltair.
Add a photo to this gallery

Retrieved from "https://memory-beta.fandom.com/wiki/Boldly_Go,_Issue_7?oldid=664572"
Community content is available under CC-BY-SA unless otherwise noted.