The Original Series: Boldly Go No. 8

It's up to Kirk, Spock and the Academy cadets (including their newest member, Jaylah from STAR TREK BEYOND!) to solve the murder of the Romulan ambassador before the Babel peace conference ends in disaster and a new course is set for galactic war! The finale of an epic storyline with guest artist Megan Levens!

The Federation and the Romulans met at a peace summit on Babel to discuss joint preparations for the Borg's return. Any optimism about cooperation vanished Romulan Ambassador Joltair died suddenly, and Starfleet Academy Cadet Shev Akria was apprehended as the prime suspect in his poisoning. Cadet Jaylah freed Shev from custody, and now the Romulans demand justice...

James T. Kirk, Hikaru Sulu and Zahra have donned space suits and manually search the asteroid field for the murder suspects. They soon come under fire from black suited assailants. Back on Babel, Pilok's temper has only worsened in the face of Shev Akria's escape, declaring that this is no longer a peace conference but a manhunt. Though Sarek encourages a logical deduction, there are simply too many possible suspects who stand to benefit from continued hostilities between the Federation and the Romulan Star Empire. Hiding the ventilation system, the Starfleet cadets despair over their seemingly hopeless situation before Grace Chen has an idea. If Joltair's body is held in cryogenic suspension, then could T'Laan mind meld with him and discover who the killer was? Though such a thing has never been attempted, T'Laan confirms it is theoretically possible.

In the asteroid field, the Endeavour crew is pinned down before Kirk uses the rocks (and moves gleamed from watching the women's Zero-G volleyball team) to drop all three hostiles at once. Sulu meanwhile has found their shuttle. Entering, the three are shocked by what they find at the controls.

Lucia Gonzales explains their plan to Doctor McCoy who agrees despite the ethical and legal issues but can only take T'Laan with him to avoid suspicion. Bribing their way past the guard with alcohol, McCoy opens the cryo-chamber to allow T'Laan to mind meld. Though caught off guard by the synaptic feedback, T'Laan is able to view Joltair's life and see that he truly believed in peace as well as finding the identity of the likely suspect.

In the vents, Jaylah attempts to comfort Shev before Romulan guards arrive and capture them. Before they can be taken away however, Spock arrives with T'Laan who reveals she mind melded with Joltair and identified the true murderer. A fact she supports by revealing the secret that Pilok is Joltair's daughter. With that, Spock hails Kirk to beam down. The Endeavour has captured the real killer: The Tellarite ambassador Kintro. Though Kintro attempts to justify his actions, Spock states that old grudges and alliances are irrelevant in light of the Borg threat. Pilok capitulates and exchanges the cadets for Kintro. Before the Romulans leave however, Kirk again attempts to speak to Valas who offers non-answers and cryptic statements before wishing him safe travels.

Aboard the Endeavour, the bridge crew discusses the mystery of Valas but take solace that the Romulans have at least agreed to another peace conference. Ambassador Akria speaks to Shev and apologizes for his lack of faith in his son. Though not fully in agreement with Shev's commitment to Starfleet, he promises his son will always have a home on Andor. Though thankful, Shev claims to already having a home, with his friends from Starfleet Academy. 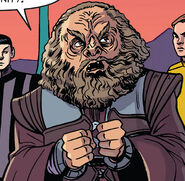 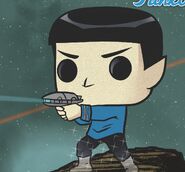