The Next Generation No. 17

43747.3
Wesley's childhood fears come to life... and take over the USS Enterprise! – Boogeymen was the 17th book of Pocket Books's numbered series of TNG novels, written by Mel Gilden.

Eric Baldwin is the Federation's premier exologist, a specialist in all manner of alien lifeforms—and one of Captain Picard's oldest, most trusted friends. But Baldwin's discoveries have made him enemies across the galaxy, and now he wants Picard to help him by erasing all traces of his existence.

But Picard soon finds himself with little time to worry about Baldwin's problems. For the USS Enterprise has suddenly become a strange and dangerous place—a ship where assassins lurk in every corner, and even old trusted friends are not what they seem. Threats all masterminded by the strangest race of aliens Picard and his crew have yet encountered…

Wesley Crusher's personal log, stardate 43747.3
I don't seem to be making any progress in my pre-commission course. I'm proficient in science or math, anything for which logical thinking is all that’s needed. But when it comes to command, I don't know if I have what in the 20th century they called "the right stuff".

Commander Riker tells me that being a good commander is at least half intuition. Generally, the more important a question is, the less data you have available to answer it. He says that the skills one uses to decide correctly are more likely to be learned playing poker than chess. Maybe it's too bad I’m such a good chess player.

Commander Riker assures me that even Captain Picard, who likes to do things by the Starfleet book, is as successful as he is only because he knows when to ignore the book and go with his gut feelings. He expects the unexpected. When I told Data about this, he said that expecting the unexpected was, by definition, impossible. Sometimes Data is too literal to get the point.

What about Data? Being a machine, he has no intuition. At least, that's what he tells me. But he is a very complex machine, and the vast number of circuits in his positronic brain—a number that approaches the number of synapses in a Human brain—allows him to manifest behavior that sometimes looks like intuitive thinking. Are appearance and reality ever the same thing? How do you know? Not Mom or Riker or Geordi or even Data can give me a satisfactory answer.

Therefore I have to believe it's possible to learn to be intuitive. Or, if I can’t do that, maybe I can gain so much experience that it will look like intuition. But how can I get experience running a starship? I had a hard time convincing Captain Picard that I belong on the bridge. What are my chances of convincing him that I should sit in the center seat? I have two chances—slim and none. (That's kind of a joke. I'll have to see if Data understands it. He always appreciates an opportunity to understand humor, even when he fails.)

Leaving the Enterprise and going to Starfleet Academy is out of the question. I'll have to go eventually, but right now— 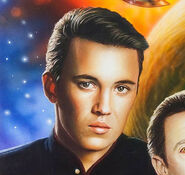 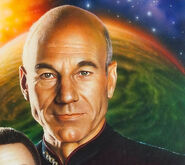 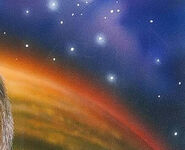