The Borg probe featured similar equipment as the Borg sphere but with 180 meters length and a complement of 200 Borg drones, the interceptor was much smaller. (ST reference: The Official Starships Collection issue 130: "Borg Probe")

In the 2370s decade, interceptor's function in the Collective was to act as a probe or scout ship, identifying unassimilated vessels and stations, determine their potential value, and assimilate or eliminate them based on its evaluation. Interceptors were armed with energy beams and equipped with transwarp drive. (ST video games: Armada, Armada II)

The USS Voyager encountered an interceptor in 2375, in the ensuing battle the interceptor's shield matrix was damaged allowing Voyager to beam a photon torpedo directly inside which detonated before the interceptor's drones were able intervene. The resulting explosion destroyed the vessel with all hands, but the Voyager crew recovered usefful materials and key information from the remains. (VOY episode: "Dark Frontier")

The hull of Borg interceptors encountered in 2377 resembled that of the Federation holoship, with a pair of nacelle-like tubes added to the ventral aft section. (ST video game: Armada II)

In 2380, a lone Borg interceptor was part of the seemingly damaged Borg fleet seeking an alliance with the Federation. The Borg armada traveled to a Federation starbase to negotiate with Starfleet. The interceptor was not seen in the subsequent fleet actions, but all Borg presence was eradicated by a virus Mister Data delivered to Captain Jean-Luc Picard from the 29th century. (ST - Hive comics: "Issue 1", "Issue 4")

During the Borg Invasion of 2381, the USS Aventine under the command of Captain Ezri Dax attacked, disabled, and boarded a lone Borg interceptor as part of a daring plan to stop the massive Borg armada rampaging through Federation space. (ST - Destiny novel: Lost Souls)

By 2409, interceptors were classed as a type of probe and fulfilled the role of a frigate in the Borg fleet, which itself was supplemented with two smaller probe classes, the tractor probe and regeneration probe. The interceptors acted as support vessels as part of larger groups, or as a group of three. When disconnected from the Collective, the ship's typical green glow turned cyan. The rebellious Borg Cooperative retained this color scheme. (STO missions: "The Price of Liberty", "Borg Disconnected")

In an alternate timeline where the Borg used Voldranaii drone ships to dupe Starfleet in 2380, Borg interceptors continued service into the 29th century. By the year 2880, it had been more than a century since the last Federation holdout had fallen, and the Collective had established dominion over the galaxy. A Borg interceptor was visible through a screen when Borg King Locutus decided to change history. When Locutus detonated a number of nearby Borg cubes and Borg spheres, the interceptor was not seen. (ST - Hive comic: "Issue 1")

In the Kelvin timeline, Borg probes were small vessels deployed in swarms from Borg cubes in the 23rd century. When the Borg invaded the Neutral Zone in 2263, Independents and the major factions in the region encountered both swarms of these, and individual Borg probes. (ST video game: Fleet Command)

In the 2370s decade, areas of the vessel's hull changed color to represent allegiance. On the interceptor, the customary Borg glow was held in fleet colors in 2376, whereas the pair of nacelle-like tubes at the ventral aft section changed color with affiliation on the 2377 configuration of the ship. (ST video games: Armada, Armada II)

By 2409, the allegiance was signified by the glow again, with green for the Collective and cyan for disconnected, liberated and Borg Cooperative vessels. (STO - The Delta Quadrant mission: "Borg Disconnected") 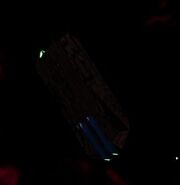