The Venette Convention has always remained independent, but it is about to become the flashpoint for a tense military standoff between the two power blocks now dominating interstellar space—the United Federation of Planets and the recently formed Typhon Pact. The Venetan government turns to the Typhon Pact’s Tzenkethi Coalition for protection in the new order and has agreed to allow three of their supply bases for Tzenkethi use. But these bases — if militarized — would put Tzenkethi weapons unacceptably close to Federation, Cardassian, and Ferengi space. While Captain Ezri Dax and the crew of the USS Aventine are sent to investigate exactly what is happening at one of the Venette bases, Captain Jean-Luc Picard and the USS Enterprise are assigned to a diplomatic mission in order to broker a mutually acceptable resolution. But the Cardassian delegates don’t seem particularly keen on using diplomacy to resolve the situation, which soon spirals out of control toward all-out war….

The Venette Convention was on the verge of joining the Federation when the negotiations were abandoned at the outbreak of the Dominion War. Now, they have formed an alliance with the Tzenkethi and the Enterprise is assigned to transport a joint Federation-Ferengi-Cardassian delegation to Venette to discuss the new situation. The situation becomes more tense when the Cardassian negotiator, Detrek, reveals the Venetans have just agreed to lease the Tzenkethi three bases on the borders of their respective territories.

The Aventine is invited to inspect Outpost V-4, the base near Federation territory, to confirm it is only being used for civillian purposes. Ezri's task is complicated by the presence of Commander Peter Alden, an old friend now working for Starfleet Intelligence who has an obsessive paranoia about the Tzenkethi. The crew are concerned to learn the Tzenkethi are preparing storage for what they claim are chemicals to help their skin in the Venetan environment but could well be bioweapons.

Picard and Crusher are assigned to the negotiating team on Venette but things are derailed when Detrek immediately begins making belligerent accusations towards the Tzenkethi, in the end openly implying the Cardassians are spying on them. The Cardassians are banned from the talks and the Tzenkethi gain further credit when they reveal they had apprehended several Federation spies.

Ezri sends Alden to steal a sample of chemicals from the outpost's medical centre. Tarses comes up with a deal where the Federation could arrange to supply the Tzenkethi with harmless chemicals which will meet their claimed purpose. However, the Venetan administrator Heldon then finds a bomb in the medical centre and Ezri ends relations by refusing to hand Alden over to the base personnel. The Ferengi negotiator, Ilka, is instructed to make a private deal where Ferengi observers are placed on the nearby base, while Picard announces the Federation and the Cardassians will blockade the Venetan border near the other bases, preventing the Tzenkethi delivering any supplies. Tzenkethi representative Alizome offers Crusher medical information in exchange for ending the stand-off but Crusher is ordered by Admiral Akaar to refuse.

The Aventine is reassigned to assist the Cardassians in retrieving an undercover agent from Ab-Tzenketh. However, the agent, Neta Efheny, has already had a cover comprised by inadvertent contact with an undercover Federation agent, Alex Gardner, who is afraid of capture and wants to be retrieved with her. Efheny reluctantly takes Gardner and a Tzenkethi friend, Corazame, who believed the pair were involved in an unauthorised relationship, to the pick-up point but her implant will only allow one to be transported. Gardner attacks her to gain the implant and Efheny kills him, then gives both the implant and the information she gathered to Corazame. Corazame is beamed aboard the Aventine and looked after by Alden, while Efheny surrenders to the Tzenkethi, letting them believe Corazame was the spy, happy in the knowledge she will be reconditioned into believing herself to be a docile low-grade Tzenkethi worker.

With this information, the Cardassians are able to expose the Tzenkethi's plan to blackmail their embassy staff into pursuing pro-Tzenkethi policies. Embarrassed before the Venetans, the Tzenkethi turn away from the blockade and agree to a deal where they will accept the Federation medical supplies and the presence of Federation and Cardassian observers on the outposts in exchange for placing observers on Khitomer Accords-run bases in similar positions. Picard and Crusher are disappointed to realize the negotiations were always intended to fail, with Detrek deliberately pushing the Tzenkethi into a position where they would have to back down from military action, while Ezri and Heldon remain uncertain whether it was Alden or the Tzenkethi who planted the bomb. 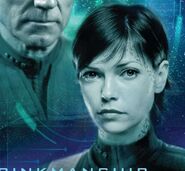 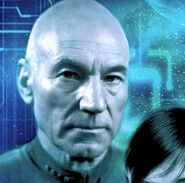 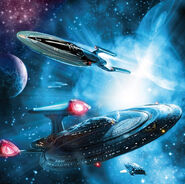