2151
By the Book is a novel, the first original book based on Enterprise, written by Dean Wesley Smith & Kristine Kathryn Rusch and released by Pocket Books in January 2002.

In their first few weeks in space, Captain Jonathan Archer and the crew of the Enterprise have already discovered several new species and explored strange new worlds. But each planet brings new discoveries… and new dangers.

The Fazi, whose ultraregulated culture ranges from strict conversation protocols to unvarying building designs, inhabit half of a planet discovered by Enterprise. But after a disastrous first contact with the ruler of the Fazi, Archer must depend on Vulcan science officer T'Pol and communication specialist Ensign Hoshi Sato to help him mend relations with the people of this planet, and unravel the mystery of the other creatures living on the world.

Enterprise comes across a planet inhabited by a race known as the Fazi, who have a highly structured society, even though they have recently achieved space travel. Jonathan Archer makes first contact with them but the first meeting goes disastrously when he fails to follow the protocol for speaking in turn.

Meanwhile, Malcolm Reed has become curious about an apparently primitive spiderlike race who live on the planet's southern continent and discovers they are actually an advanced underwater civilization. Archer again contacts the Fazi leader, Draa, but he brings the conversation to an abrupt end when Archer mentions the other race.

Travis Mayweather takes a team to the aliens' village to collect samples but when the aliens reappear suddenly, Crewman Jamal Edwards collapses in pain when they surround him. An attempt to retrieve him with the transporter accidentally brings one of the aliens onboard as well and, when two security guards also collapse in his presence, Archer has the alien secured in the brig.

T'Pol and Phlox realize the aliens communicate telepathically using a focused beam of psionic energy, which is damaging and potentially fatal to humanoid brains. Hoshi is able to develop a translator that converts thoughts into words and vice versa and junior engineers Novakovich and Williams are able to devise a psionic shield to protect Archer from the alien's thoughts. With these, Archer communicates with the alien, a Hipon, who explains his people colonized the world two thousand years previous when the Fazi were still primitive. Their attempts to communicate with them have proved fatal, for reasons that they didn't understand until now.

Mindful of affecting the aliens' development too much, Archer manages to establish peaceful relations with both races before leaving the planet in the hope they can build a beneficial relationship on their own. 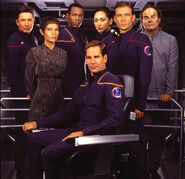 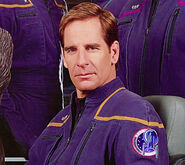 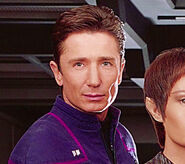 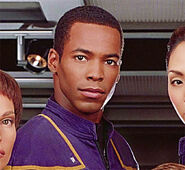 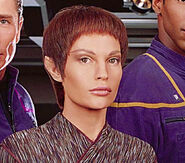 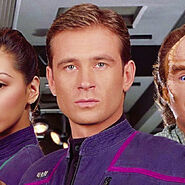 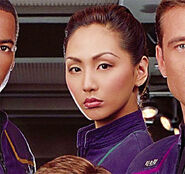