The Original Series (US Comic Strips) No. 1

Called Home is a Star Trek: The Original Series comic strip. It is the first story in the US Comic Strips series, published by the Los Angeles Times Syndicate beginning in 1979. The story was set after TOS movie: The Motion Picture, depicting events from Captain Kirk's second five-year mission aboard the refurbished USS Enterprise (NCC-1701).

In this story, written and drawn by Thomas Warkentin, the Enterprise investigates a distress call sent from the moon of a long-dead world.

From the Syndicate sales kit sent to newspaper editors in 1979 (reprinted in The Newspaper Comics, Volume 1)
Star Trek, the Legend, is now Star Trek, the Comic Strip. Join the crew of the U.S. Starship Enterprise [sic] in its mission to explore strange new worlds and seek out new life and civilizations. Your readers now can participate in the adventures of Captain Kirk, Spock, "Scotty," "Bones," Sulu, Chekov, Lieutenant Uhura and the bald and beautiful new female navigator, ilia, every day plus Sundays in this fascinating comic strip.
Star Trek, its characters and its stars, have inspired 371 fan clubs and almost weekly conventions drawing up to 20,000 people in cities throughout the country. The "Trekkie" phenomenon has spawned more than 50 books, 400 fan publications and several masters and doctoral theses. Readers of all ages love Star Trek and will follow its comic strip adventures through uncharted space with fervor.
The Star Trek comic strip will be the beneficiary of the massive promotion accompanying the release of the new Star Trek motion picture. The comic strip will run in eight-week sequences. The story line will be the same for both the daily and the Sunday strips with an expansion of the plot on Sundays. However, both the daily and the Sunday strips can stand alone effectively.
The artist, Thomas Warkentin, a lifelong science fiction fan with an impressive list of credits to his name, will be producing both the art and the stories. Not only is he a superb draftsman, but his cliffhanging plots leave you thirsting for more. We know this fabulous new comic strip is a sure-fire winner. Launch Star Trek in your newspaper and, as Kirk says, "boldly go where no man has gone before.

Investigating the spacecraft on the surface in thruster suits, Kirk, Spock and McCoy determined that a hole in the ship was caused by a meteor after it had safely landed 900 years earlier. A hatch had been left open, revealing two sets of footprints, which dead-ended at a set of tread-prints. Nyota Uhura located the exact source of the radio transmission, a robot crawler vehicle which appeared over the rim of an impact crater, creating the tread-print pattern the landing party had been following. Suddenly it placed an energy field around the three people, paralyzing them while they heard in their minds messages of peace and love. Gently, robot tentacles gathered up the landing party and carried them down a corridor hidden below a boulder into a vast underground complex. They saw two humanoids in spacesuits at the end of a long corridor of hypersleep chambers, and were deposited gently into the next three chambers.

Excerpt from Captain's Log: Stardate 7494.2
Inside the hypersleep chambers, our paralysis began to fade as we were subjected to a soporific vibration which, according to Spock, induces sleep by altering the electrical period of the cortical neurons. After Doctor McCoy and I had yielded to sleep, Spock used Vulcan mind-control to enhance his alpha state and suppress theta activity, remaining awake long enough to reach his communicator and have us, including the little aliens, beamed aboard the Enterprise.

Sensors showed the moon to be artificial, mostly hollow with a neutronium hull. In sickbay, McCoy and Christine Chapel revived the two aliens, who explained to Kirk that their world was threatened by nuclear war, so they'd gone to their moon to use it as an orbital weapon platform to "enforce planet-wide peace." Their race believed their moon to be a spacecraft guided by "the gods."

Suddenly the Toltan Moon grabbed the Enterprise with a tractor beam and began dragging the ship toward a large opening on the surface.

Captain's Log: Stardate 7494.3
We are caught in a tractor beam pulling us toward the moon.

With warp and impulse engines at maximum, we are still in the grip of the tractor beam.

After accessing its data banks, Spock discovered that the aliens were one of many Toltan colony worlds that were seeded long ago, left to evolve, watched over by sentinel Toltan Moons that were programmed to return "home" with those who had achieved a moon landing. Although he was unable to ascertain why the Toltan Moon didn't depart 900 years ago, Spock said, "its program calls for it to return now. And we are preventing it from completing its mission." He added, "It wants those little astronauts, Captain... with or without us."

Kirk considered firing torpedoes, but the aliens proposed a different solution. Having been told that their world had been destroyed by nuclear weapons 900 years earlier, they insisted on being returned to the moon, which they believed was a "sacred vehicle that will carry them to a paradise." The two aliens were transported back into their hypersleep chambers. The Toltan Moon immediately disengaged its tractor beam, then left the orbit of its planet, carrying its two passengers "home". 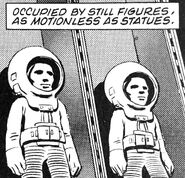 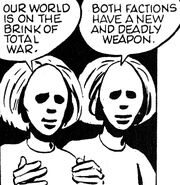 Retrieved from "https://memory-beta.fandom.com/wiki/Called_Home?oldid=666677"
Community content is available under CC-BY-SA unless otherwise noted.