2360s decade
"Captain's Log: Jellico" was a comic installment in the IDW Publishing Star Trek comic miniseries Captain's Log. Written by author Keith R.A. DeCandido, and illustrated by J.K. Woodward, this comic was released in 2010 and focuses on the character of Captain Edward Jellico.

The story behind the man who replaced Captain Picard! When Captain Edward Jellico took command of the starship Enterprise-D in the landmark Next Generation two-parter "Chain of Command", it took the Star Trek world by storm! Now, learn the background of one of the most controversial characters in Trek history, as Captain Jellico's new first officer joins the USS Cairo only to find herself thrust into a conflict with the Cardassians…

Having recently completed her tenure as an instructor at Starfleet Academy, Commander Leslie Wong has put in a request for a position at Starbase 375. Instead, she has been drafted as a last-minute replacement for Commander Ch'oe, the first officer of the USS Cairo on its patrol of the Solarion star system. Beamed aboard, Leslie is greeted by Captain Edward Jellico who catches the commander off-guard by his near-encyclopedic knowledge of her past and his quick adaptation to her. After confirming that Leslie is up to speed on Solarion's history, Jellico promptly leaves her in command.

Leslie is caught off-guard by the four-shift rotation present on the Cairo but concedes that the old ship runs smoothly in spite of this inefficient system. As Leslie steps back on the bridge, Ensign Sim calls for a yellow alert which Leslie belays. Ensigns do not have the authority to call yellow alerts. Nonetheless she hears out Sim's reasons, there is a Cardassian vessel on the outskirts of the system. Leslie points out however that the vessel is outside Federation space, much to the amusement of the helm officers. Leslie quickly chews them out before telling Sim not to thank her. She is assuming the ensign called yellow alert because she is stupid not because of the history of the Bajorans.

Leslie briefs Jellico on Sim's findings but is scolded for her caution and her justification of being unsure regarding protocol aboard the Cairo. Jellico hails the CDS Harkon who, exploiting the fact that they are outside the system, quickly closes communication. Sim's scans of the Harkon show it is lightly armed but finds it is emitting odd E.M. readings. Jellico praises the ensign which serves as a tipping point for Leslie who has twice been chewed out in full view of the crew. Once this mission is complete, she intends to get a transfer as far from Jellico as possible.

Some time later, Sim requests a modification that will allow them to increase the range of long range sensors while keeping to their approved flight plan. Though Leslie confirms that can be done, it will deprive them of short-range sensors and take several hours. Jellico gives her one hour. This time limit comes as little advice to Alexander Honigsberg who is quite accustomed to working extra shifts for no good reason, a remark which would be considered grounds for insubordination but one that Leslie is more than willing to let slide.

Exactly fifty-seven minutes later, the Cairo is now able to detect that the Harkon is indeed within Solarion. Jellico orders the Cardassians to vacate the area only for Gul Zarkat to charge into Federation territory. The Cairo is unable to pursue given her lack of short-range sensors (the same sensors Jellico insisted were not important) but there is only target within sublight distance: Campagna Station.

Leslie has a brainwave and orders Sim to tie into Campagna's systems to replace their lost sensors. The connection is established in time to see the Harkon firing on the station. Sensors confirm the lack of the E.M. readings and that the Harkon has suddenly grown new weaponry. In spite of her weapons, the Harkon is still only a science-vessel and no match for an Excelsior-class starship.

Hours later, Leslie has compiled her report and found that the Cardassians were developing metagenic weapons and hoping to use the equipment on Campagna to further their research. Jellico praises his first officer's work and asks her to stay onboard, praising her adherence to protocol, while admitting he is considering to transfer Sim off-ship given her rookie mistakes. With that, Leslie takes her leave to oversee prisoner interrogation and is reconsidering her initial decision. Perhaps, she will stay on the Cairo for a while. 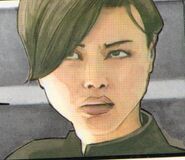 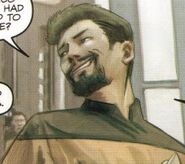 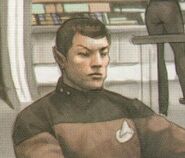 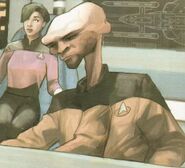 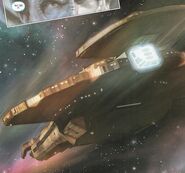 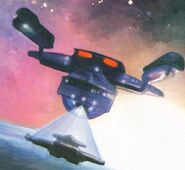 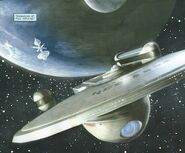 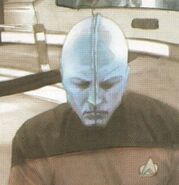 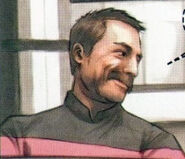 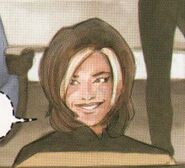 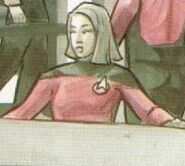 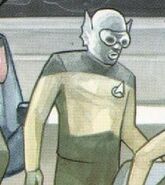 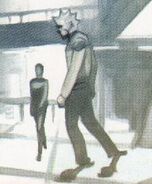 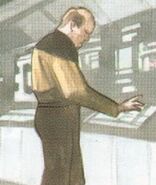