From solicitations
After the events of Talos (Which were detailed in the classic television two-parter, "The Menagerie"), Captain Christopher Pike and the crew of the Enterprise have been called back to Earth for a debriefing. Upon entering our solar system they are attacked by a suspicious spacecraft—could this episode somehow be linked to Talos… and what eventually awaits Captain Pike?

2254: Following the events on Talos IV, the USS Enterprise limps back to Earth for a full debrief and to replenish her depleted crew. As the ship sails past Jupiter, Captain Christopher Pike confesses to Number One how much he sacrificed to become captain of a starship but wonders if such a post is worth it in the face of all the lives regularly lost in the line of duty. The detached Number One can offer no comfort or answers before the ship is rocked by an attack.

When the two emerge on the bridge, Spock briefs the captain on the situation: An unknown starship dropped out of warp and made a b-line for Jupiter. When the Enterprise hailed, she was fired upon. With no reinforcements coming soon, the responsibility falls to the Enterprise. Leaving Number One in command, Pike leads an away team onto the alien ship to try and cripple its engines. Upon beaming in however, the away team finds themselves outgunned by the aliens' powerful weapons. Led by Yeoman Colt, they fall back to the warp engines with Pike fusing the doors shut. Just as Colt finishes overloading the engines, Stevens falls to the aliens. Pike breaks down at the ensign's screams, again wondering if all the deaths are worth it. Colt grimly says cannot answer that, she is unsure if anyone can, before the two are beamed back to safety as the ship explodes. On the bridge, Spock identifies the aliens as Halogians but cannot say why they attacked. Dismayed at the senseless deaths, Pike says he will recommend Colt for a promotion before brusquely dismissing her.

2266: Colt has recently been promoted to the rank of captain and is to be sent out to train new cadets on the USS Exeter. Joining her is the now fleet captain Pike. In the privacy of the turbolift, Pike explains to Colt that his new, seldom appointed, rank is in anticipation of total war with the Klingon Empire, a war he fears Colt's new generation of cadets will be sacrificed to. Halting the lift, Colt says Pike took every death on the Enterprise very hard. Does he really want a job where he's going to be responsible for even more lives? Pike responds that people cannot chose their destinies. When fate calls, everyone can only do the best they can.

As the Exeter arrives in the vicinity of Jupiter, its sensors detect another Halogian ship. As Colt orders an intercept course, Pike reminds her of the Exeter's limited defensive capabilities. When the alien craft comes on screen, it is firing a beam of intense heat directly at Jupiter's core and Pike realizes what the aliens are trying to do. There is a theory that Jupiter is a failed star, if the Halogians are able to generate sufficient heat, they could induce stellar fusion and wipe out all life in the solar system. The Halogians take note of the intruder and fire, the shot destabilizing the baffle plates in engineering. Leaving Colt to destroy the aliens, Pike races down to engineering and evacuates all the cadets. As the Halogian ship explodes, Pike calls to report a successful evacuation right before the baffle plates rupture dousing him in delta radiation.

Some time later, a doctor finishes wiring Pike into a life support chair before he leaves Colt alone with her former captain, informing her that one blink means "yes" and two means "no". Tearfully, Colt informs Pike that the Halogians were turned down for Federation membership four times and sought revenge for the insult. Thanks to Pike's sacrifice however, the Exeter survived her battle with zero casualties but at tremendous cost. Planting a goodbye kiss, Colt answers his twelve year old question. It was worth it to her, every second. As she walks out, she can only hope it was worth it for Pike as well…

…missing the single blink from the man's chair. In the end, it was worth it to him as well. 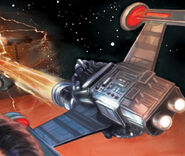