Captains of Sea and War

Captains of Sea and War

32
"Captains of Sea and War" is a comic, a special issue of IDW Publishing's Year Five series.

James T. Kirk has had many loves during his mission among the stars, but this time he may have met his match in fellow Starfleet Captain Laura Rhone. This special story by award-winning writer of prose, comics, and television Paul Cornell (Doctor Who) takes Captain Kirk to where he has never gone before!

On a beach, Kirk begins recording a log entry concerning his distaste for crews taking shore leave in bulk before he's approached by Captain Laura Rhone. As the two captains get to know each other, they spy a Bolian ensign being abducted by terrorists. The dance far too familiar to both of them, the firefight is a short and brutal one that sees every terrorist downed in short order before both their senior staffs run in. Paperwork on the latest incident runs late into the night and quickly ends in lovemaking.

Six months later, the USS Drake is facing off against Nausicaan pirates. Before it can makes its move, the USS Enterprise races past and launches a devastating surprise attack. As the pirates are marched to the brig, Rhone calls Kirk out for not coordinating with her. Humbled, Kirk apologizes which leads to another lovemaking session.

On a nature walk, Rhone quickly pegs Kirk as lost outside of the captain's chair. Though Kirk confesses that he's begun questioning whether or not he can have a live outside of Starfleet, Rhone cannot relate. Why, she asks, would anyone give up the captain's chair. The two's relationship only continues to grow, becoming every more physical and spending more and more of their free time together.

Such is their bond, that neither captain needs to communicate when facing off against a Vas Hatham-class warbird. As the two celebrate, Rhone asks Kirk to marry her. Caught off guard, Kirk seeks Spock and McCoy's counsel. For once, the two are in agreement. Spock has seen Kirk burn through so many woman and feels that the one so similar to Kirk is the only one who can give him lasting happiness. McCoy, having ignored that same advice once upon a time, can only encourage Kirk to take this chance at love. When Kirk speaks to Carol Marcus however, his ex-wife implants the seeds of doubt, suggesting that two people so very similar to one another will only lead to stagnation. When Uhura later tells Kirk that there's an opening for admiral, Kirk thanks her before cursing Carol for her words.

Six weeks later, Kirk's doubts have overcome him and he has to turn down Rhone, to her sadness and anger.

A year later, Kirk is indeed an admiral. An ensign soon draws his attention to a miniature black hole that spontaneously formed in lunar orbit. With the Drake as the only ship in range, Rhone contacts Starfleet Command to let them know that she, along with her helm and navigation officers, will be staying aboard the doomed ship. To Kirk's sadness, the Drake plunges into the singularity, saving the day.

Fifteen years later, Kirk finds himself demoted back to captain. Though he loves the feeling of the big chair, he asks if he's living his life in circles. As he sits in his quarters on the USS Enterprise-A, he gets an unexpected call. The USS Drake has returned.

Flying out to meet the ship, diamonds now jutting out its hull, Kirk meets with Rhone. Though Kirk wants to try again, the tables have turned. Now she has been promoted to admiral. After taking a moment to reflect on their failed romance, Rhone says that she won't be officially promoted for a few days more. Surely... they can squeeze just a few more shenanigans in that time.

As a result of IDW Publishing's ongoing delays, this special Valentine's Day issue is set further along in the chronology of the ongoing storyline than the regular issues released at the time, as indicated by Kirk being out of his coma. 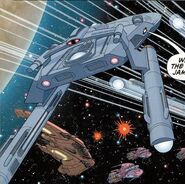