Seven years have passed since a catastrophic explosion on the Klingon moon Praxis touched off a chain of events that would result in the assassination of the reformist High Chancellor Gorkon, and the eventual creation of the historic Khitomer Accords. Now, as part of the ongoing efforts to undo the disastrous fallout from the destruction of Praxis and with the help of aid supplies from the United Federation of Planets, reconstruction is in progress, and after years of slow going hindered by political pressures and old prejudices, headway is at last being made. But the peace process begun by the Khitomer Accords is still fragile just as the deadly plans of what is believed to be a hard-line Klingon isolationist group violently come to fruition.

Yet the group thought responsible for the deadly attack has been dormant for decades, and its known modus operandi doesn't match up to the manner of the strike. And further investigation leads to an unexpected revelation connected to the Gorkon conspiracy of 2293, and in particular one disgraced and very familiar Starfleet lieutenant...

An attack on the Da'Kel system using a banned isolytic explosive destroys the station co-coordinating the Federation's relief effort with the Klingons. The Federation insist on participating in the investigation and the Excelsior is assigned as an observer. Lieutenant Elias Vaughn, a junior officer of Starfleet Intelligence finds evidence suggesting a link between the attack and the assassination of Chancellor Gorkon and, when he fails to convince his superior, takes the information directly to Sulu and Darius Miller, the Intelligence officer handling the case. He ends up being invited to join them on the mission.

En route to Klingon space, the Excelsior collects Valeris, now the only Federation survivor of the conspiracy. She reveals a coded message refers to a Kriosian terrorist group, the Thorn, who oppose the Klingon occupation of the planet and were allied with those attempting to stop the Khitomer Accords. However, General Igdar, the Klingon in charge of the investigation, insists the culprits are the House of Q'unat, a supposedly extinct group of Klingon isolationists. When a second attack on the Da'Kel system destroys the colony, Igdar blames the Federation and orders the Excelsior out of Klingon space. Major Kaj, an operative of Imperial Intelligence, believes them, however, and takes Miller, Vaughn and Valeris aboard her own ship, the Chon'hm.

Igdar declares them traitors and orders an attack on the ship during which Miller is killed. Valeris leads them to the station where she met the Thorn, which is now deserted but was used to manufacture the explosives. They manage to contact the Thorn as allies but an apparent betrayal by Valeris and a tip-off from the Thorn's patrons sees Vaughn and Kaj taken prisoner and the rest of the crew killed. Vaughn and Kaj realize the Thorn are being supplied by the Tal Shiar.

Valeris saves Vaughn and Kaj from execution but several members of the Thorn depart in the Chon'm, intending to destroy Qo'nos with an isolytic explosive. Vaughn, Valeris and Kaj follow in the Kriosian ship and discover the Thorn about to set off the explosive in the remains of Praxis, which would trigger a subspace rift that would destroy the entire system. Valeris manages to destroy the explosive's discharge, causing a rupture which wipes the explosive and the surrounding area out of existence. The Chon'm is destroyed by Igdar's flagship but Igdar then attempts to kill Vaughn and Valeris, so he can blame them and take the credit. He is stopped by Kaj and taken into custody by the Klingons.

The Klingons opt not to carry out retribution on the Kriosians but also hide all evidence of their involvement, blaming the attacks on the House of Q'unat. The Federation begin supporting the Kriosians through diplomatic channels. While Kaj assassinates the Tal Shiar members responsible for the attacks, a pardoned Valeris begins life on a Vulcan colony under a new identity. 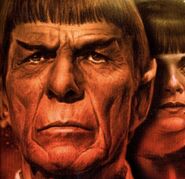 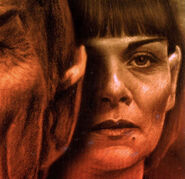