A caveman was a being who inhabited a cave, often associated with primitive humanoid cultures. Groups of cavemen often united into tribes armed with spears or cudgels and dressed in animal skins. They sometimes created cave paintings.

In the Stone Age on Earth, at least two caveman tribes were led by Vandar, an immortal who had trapped Q and used him as a genie. As a result, the cavemen were armed with spears that shot energy beams. (TOS - Legion of Super Heroes comic: "Issue 6")

Circa 2700 BC, during Sarpeidon's last ice age, Zar and Zarabeth lived in a cave. (TOS episode & Star Trek 4 novelization: All Our Yesterdays, TOS - The Yesterday Saga novel: Yesterday's Son)

Germal was raised in a cave on Hercula. Her people, the Yerba, were considered wild animals by the Herculese, who kept them in zoos and often used them for slave labor. (TOS comic: "The Animal People")

The Tol people of the planet Neesan lived in caves. (TOS comic: "The Cosmic Cavemen")

The inhabitants of an unnamed asteroid lived in caves. (TOS comic: "And a Child Shall Lead Them")

Early in the year 2266, James T. Kirk and McCoy were assaulted by Valtarii cavemen on Vultra. (TOS comic: "The Crucial Element")

A group of Ominnusian cavemen defended their sacred gardens from Spock and Leonard McCoy in 2266. Among their plants was an herb, genitum lars, needed to cure a plague. (TOS comic: "Child's Play") 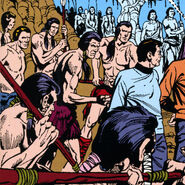 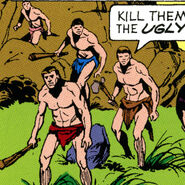 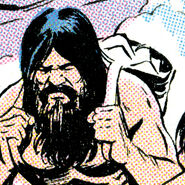 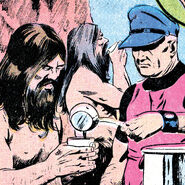