2278
Chainmail is a Star Trek novel, the second book in the Gateways crossover miniseries, and to date the only full-length entry in the Star Trek: Challenger series, which was the evolution of the New Earth series. Chainmail was written by Diane Carey, and released in August 2001, her last original Star Trek novel. As with each entry in the Gateways series, Chainmail had somewhat of a cliffhanger ending, with the resolution to follow in the What Lay Beyond anthology. Chainmail would be concluded in the short story "Exodus" in that volume.

Dangerous remnants of an extinct interstellar civilization, the Gateways connect the Alpha Quadrant with the farthest reaches of the galaxy. Hidden away in various corners of the universe, the ancient portals could be the future of space travel, but they may also provide an open doorway for an invasion from beyond!

Twenty years ago, in the space near Belle Terre, a caravan of alien vessels disappeared into a gigantic Gateway. Now the descendants of those aliens have returned, armed with incredible new weapons and abilities. Captain Nick Keller of the USS Challenger, already struggling to maintain peace in the troubled sector, must now cope with a fleet of hostile aliens driven by their own fanatical agenda!

As Nick Keller helps to organize Blue Net, a mutual defense force for the planets in the Sagittarius Cluster, Challenger encounters a derelict that would come to be known as Grave Ship, or "Pompeii". After rescuing Shucorion and Zane Bonifay, who had boarded the ship after it damaged their Blood plume patrol ship, Keller was informed that Bonifay was to be executed in accordance with Blood Many law, for disobeying orders. When a squadron of Blood ships came to take possession of Bonifay, he refused to hand the bosun over, triggering a fight between Challenger and the Blood squadron.

During the battle, the owners of the Grave Ship, the Living, emerged from an Iconian gateway. As Keller's command of his crew and Blue Net fractured, he determined that outwitting the Living would help him regain control. Boarding the Grave Ship, a converted Kauld battlebarge, Keller used a remote interface with the ship's systems to take control, eventually ordering a sustained phaser bombardment to force the Living to capitulate. When this caused the mummified bodies on the ship to leave their pedestals, telling the Living on the other side of the Gateway that the Living explorers were dead. Vowing to bring all the Living to the Sagittarius cluster, Keller travels through the Gateway...

Blood Many • Human • The Living • Rassua

The Star Trek Fiction Timeline published by Pocket Books places this story in 2276, but uniform references regarding the Starfleet uniforms used throughout the New Earth and Challenger series use the 2278 uniform issue, so for the purposes of this wiki the story has been advanced in the Memory Beta Chronology. 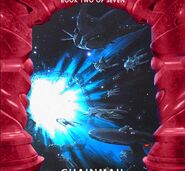 Challenger and the fleets at the Iconian gateway.