The Next Generation No. 21

ISBN 0671742647
Commander Riker must either give up the USS Enterprise or sacrifice his captain's life.

While exploring a group of devastated class-M planets in a remote sector of space, the crew of the USS Enterprise is shocked to discover a group of Human slaves on a forbidding, glacial world. When the slaves revolt against their overseers, Captain Picard and his crew sympathize with the slaves' plight but cannot interfere in the conflict.

After the revolt is a success, Captain Picard learns that both the slaves and the overseers were controlled by a mysterious bird-like race called the Tseetsk, who are coming to reclaim their property. With the time running out, the rebels kidnap Captain Picard and Counselor Troi—drawing the USS Enterprise into the middle of their deadly plan of vengeance.

After cataloging a number of lifeless worlds in the sector, the crew of the Enterprise is amazed to not only get a message from the frozen surface of the planet Koorn, but that its apparent inhabitants are human. When the man contacting them is killed right before their eyes, Commander Riker, LaForge, Worf, and a security detail beam down.
They soon learn that the humans are slaves, and their arrival as 'free humans' has started a bloody uprising of the slaves against their human overseers. The overseers however are slaves as well to an old star-faring avian race known as the Tseetsk who have been using the humans to rebuild the planet.
The away team meets Ianrni Koban, the young, scarred man who has lead the uprising against the overseers. They soon learn that these human's ancestors had fled Earth during the Eugenics wars, and thought that they were the only survivors. Their ship was caught by a wormhole and deposited in this region of space. Trying to hold on to what little they had, they were no match for the advanced Tseetsk.
The Tseetsk took them and used them as slaves, and began using them to repair ages old damage that the Tseetsk had caused in a war between different factions of their race. Captain Picard and the crew are largely sympathetic to their plight, and soon a team sets up a small research base on Koorn. They know that the Tseetsk are on their way to investigate and have about a week before they arrive.
Koban however has plans to force the cooperation of the crew of the Enterprise by kidnapping the Captain and Counselor Troi. This plan doesn't work out as well as Koban hoped when the group he had kidnap Picard and Troi are nearly all killed by something else that lives on Koorn. An ancient faction of Tseetsk that were previously thought to have been completely eradicated lives on, and has their own agenda.
Once they are able to come to an understanding between the local Tseetsk, the former slaves, and the Tseetsk representatives that have arrived, the crew of the Enterprise say their goodbyes and head off to their next mission. 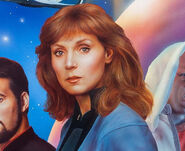