From solicitations: As a false distress call lures the Enterprise to a distant region of space, a saboteur puts Geordi and O'Brien at ground zero of a warp core that's about to breach! But is all this part of a greater scheme to draw the Enterprise into deeper danger? 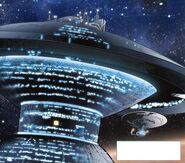