Chetar was a Klingon woman, a civilian defector in the 23rd century.

In 2273, she spoke out against the Klingon High Council along with her brother Morg. The two were given a death sentence. They ran for their lives, fleeing from Klingon space aboard an old Vegan Tripper-class commercial flyer. When they spotted the USS Enterprise in orbit of the planet Telos, they transmitted details of their flight and a request for sanctuary as refugees. Unfortunately, their radio was not working, and they were forced to intercept the Federation starship to be beamed aboard.

Chetar was uncertain what would happen next, as she'd heard of Federation death camps, torture and mind control. But Kirk accepted their request and assigned them quarters on deck five. Leonard McCoy determined they were both fit, healthy and ornery.

After IKS Rakor caught up with them and Captain Tunzos gave Kirk an hour to surrender the criminals, Morg and Chetar decided what to do over a meal. Chetar knocked out a security guard with a vase, then they ran to the bridge. She told Kirk they wouldn't be able to adapt to Federation life, citing obsessive hygiene as one of many strange Human ways. Before they boarded their spacecraft to leave, Chetar kissed Kirk on the cheek. Morg thanked him for believing in them. With Kirk's help, Tunzos was convinced that both refugees had been killed. (TOS comic: "Double Bluff") 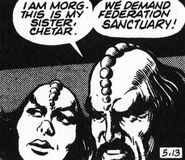 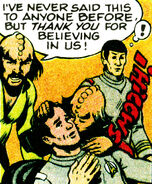 Retrieved from "https://memory-beta.fandom.com/wiki/Chetar?oldid=639605"
Community content is available under CC-BY-SA unless otherwise noted.