The year is 2255, not long after the events of the Original Series episode "The Cage." A young Spock is science officer on the U.S.S. Enterprise, under the command of Captain Christopher Pike, when an outbreak of deadly Rigelian fever threatens the crew. Reviewing the Starfleet medical database, Dr. Phillip Boyce comes up with a highly experimental and untested new treatment that might save the crew. Just one problem: it requires a rare mineral substance, ryetalyn, which is not easily obtained...except on a remote alien colony near the Klingon border. But borders are somewhat blurry in this part of galaxy. Pike will need to tread carefully in order to avoid provoking an armed conflict with the Klingons — or starting an all-out war.

The Enterprise crew has been crippled by an outbreak of Rigelian fever. The nearest source of ryetalyn, their best chance of a cure, is the neutral planet Cypria III. However, en route to the planet, the crew pick up a distress call from a Cyprian ship. Number One takes a party to Cypria in a shuttlecraft to begin negotiations while the Enterprise discovers a Cyprian vessel attempting to evade a Klingon ship. With the vessel about to explode, the Enterprise beams aboard its two occupants:a Cyprian woman named Soleste Mursh and a Klingon named Merata, who accuses Soleste of kidnapping her.

An examination quickly shows that Merata is actually a Cyprian, who has had cosmetic work to make her look Klingon. Soleste reveals that Merata is actually her sister Elzura, who was kidnapped by the Klingons as a child in the raid that killed their father. Elzura was adopted by Klingon general Krunn and considers him her father, demanding she be returned to her adopted people. Krunn's ship shadows the Enterprise as it travels to Cypria, with Pike unsure what to do with Merata, assigning Spock to try and ascertain what she truly wants.

When Cyprian prime minister Atron Flescu learns of the situation, he refuses to provide the Enterprise crew with ryetalyn unless Elzura is returned to them. When the facts become common knowledge, a mob attacks the landing party, accusing them of helping the Klingons take Elzura again, and the Enterprise is forced to violate Cyprian orders to rescue them. When they drop shields to beam them up, the Klingons take the opportunity to send a boarding party across, but they are quickly subdued and Merata stuns a Klingon trooper in order to protect Soleste.

As Klingon reinforcements attack the Enterprise, Merata's brother Junah, seeing her as one of the Klingons that killed their father, tries to kill her. Spock helps Merata steal a shuttle and return to the Klingons, who depart, making it look as though she overpowered him and escaped. The Murshes' mother Rosha helps make a broadcast to Cypria convincing the people Merata could never have returned to them, and the Enterprise is provided with the necessary ryetalyn. 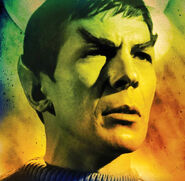