The Next Generation No. 59

47763.7
Children of Chaos – In May 1994, the 59th issue of DC Comics' 1989 series of Star Trek: The Next Generation comics. The issue consisted of a 24 page story, as written by Michael Jan Friedman. The art was by Deryl Skelton, with Margaret Clark credited as editor.

The Stargazer travels to Chalna for negotiations with what passes for their semblance of government. The Federation is maintaining a temporary scientific outpost on the planet Ynathaia, which the Chalnoth claim lies within their space. Though Picard promises that the outpost will leave as soon as they have concluded their survey, the more vocal officials demand its immediate removal. Picard accepts a trial by combat, with the prospect of war hanging in the balance. Choosing an Aldebaran sling as the weapon, he ultimately defeats his impressive opponent, winning the Federation colony time to complete their mission and peacefully withdraw.

"Present Day" entry for this article is incomplete 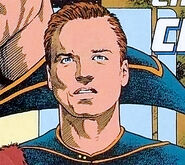