The ChoS Nebula was a region of space in the B'Moth sector, located in the galaxy's Beta Quadrant. The red and ochre nebula lay within the borders of the Klingon Empire. The nebula was comprised of dense clouds of ice and pre-stellar matter. Though few stars formed here, its tendency to form irregular pockets of gas and dense matter rendered sensor readings unreliable in this area, similar to the nearby T'Kanis Nebula. (STO missions: "Clearing out the Cardassian Union", "Empire Defense Against Cardassian Aggression")

In the year 2409, the True Way invaded Klingon space and occupied the ChoS Nebula to use it as a place to hide or from which to conduct hit-and-run raids against Imperial supply lines. The Cardassian took advantage of the sensor-obscuring qualities of the nebula to avoid detection by the Klingon Defense Force. From that year onwards, Lieutenant Commander Mara was responsible for directing KDF ships to track the True Way in the nebula, and route its forces. (STO missions: "Clearing out the Cardassian Union", "Empire Defense Against Cardassian Aggression")

In the same year, the ChoS Battle Group was destroyed by the Fek'Ihri in the Norgh system, located in the B'Moth Sector. (STO - Fek'Ihri Return mission: "Blood of the Empire") 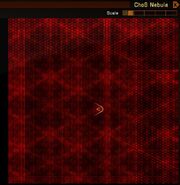 Map of the nebula.