Cloak and Dagger No. 1

c. 2396.6
They're armed, they're savage... they're Vulcan! — "Cloak & Dagger" is a Star Trek: The Original Series comic published by Marvel Comics in 1997, it is the fifth issues in the Star Trek: Early Voyages series, and the first issue in the two-part story Cloak and Dagger. The story, by Dan Abnett and Ian Edgington, sees the USS Enterprise visit Darien 224, in search of the missing starship USS Cortez, where they find a lost colony of Vulcans.

Pike and crew encounter a hostile enclave of emotional Vulcans who've been cut off from their home planet for over 2,000 years!

Ship's log, first officer recording.
The remote storm-wracked world of Darien 224 resolutely refuses to give up its secrets — chief among them is the fate of the Starfleet survey ship USS Cortez, which vanished with all hands in this system eight weeks ago. The landing party, led by Captain Pike, has so far found the only trace that the Cortez was here at all... I feel uneasy, and I don't know why. There is something here, but like Tyler's sensor ghosts, it is too insubstantial to catch. I hope the captain's faring better down below.

On the storm-wracked world of Darien 224 a landing party from the USS Enterprise discovers the wreckage of the Apollo, the first clue to the fate of the missing starship USS Cortez. Captain Pike hails the Enterprise to inform the ship of the team’s findings but barely gets through; background radiation in the system is playing havoc with the Enterprise's sensors and communications.

On the planetoid the landing party continues its investigations. Doctor Boyce gives Yeoman Colt a boost to access the hatch on the top side of the overturned shuttle. Pike finds Spock concerned, he senses something.

Meanwhile Shinobi finds something in the sand and calls for the Captain, Pike turns to witness the crewman take an energy blast to the chest. The unknown assailants kill Kingcome and then makes a charge for Pike, but is blasted by the beam of a phaser rifle liberated from the shuttle's locker by yeoman Colt.

Above, a sensor ghost becomes a little too real as the USS Cortez fires on the Enterprise. On the planet the survivors of the landing party are cornered and unable to see their attackers through the sandstorms. Adjusting their laser pistols to wide beam they try and drive the attackers into sight. The tactic works to some extent bringing the attackers out, but they plant their staff energy weapons into the ground and arm themselves with lirpas, as they move towards the party for the final attack they are blaster by energy weapons from a group of hoverboats. The leader of the ships introduces himself, in Vulcan, and instructs the landing party that they will be going with him.

As the hoverboats fly to the Last-of-all-Cities settlement, Spock speculates the Vulcans are a lost colony, predating the logic enlightenment of Vulcan. The team are brought to meet the Vulcan's leader: matriarch T'Kell, at her side is Captain John Stone of the Cortez. Whilst Colt breaks the ice with the Vulcans Pike gets a report from Stone. The Vulcans crash landed two thousand years prior and have been isolated ever since, the main colony is eager to rejoin the galactic community but there is a splinter group of warriors which butchered most of Stone's crew and wish to remain in isolation. They also have hyper-weapons outlawed on Vulcan during the enlightenment. Spock is concerned these emotional Vulcans returning to their homeworld could destabilize Vulcan.

Sutek, the Vulcan who saved the landing party, interrupts, infuriated by Spock and the state of the contemporary Vulcan people. Colt disrupts the argument before it can escalate too far informing the Captain she has made contact with the Enterprise, which is under attack!

Above, Number One tries to shake off the attackers, but on board the Cortez the renegade Vulcan Tagok is informed by his crew the Tol par-doj is installed and ready, the ancient Vulcan weapon lashes it's powerful energies at the Enterprise.

No dates are given in the story, however it is assumed to take place in sequence with the rest of the Star Trek: Early Voyages series, circa 2254. The following issue in the series which continues this story has the stardate 2396.6.

"What in the name of...?"
"Phase rifle, sir! I liberated it from the shuttle's locker when I heard the shooting."

- Pike and Colt after she shot an attacking Vulcan. 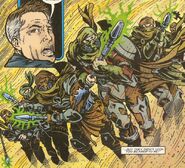 The Vulcans of Darien 224

A pair of Vulcan hoverboats 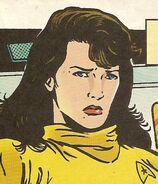 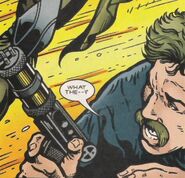