Cloak and Dagger No. 2

2396.6
Vulcan logic vs. Vulcan passion... Spock must choose! — "Cloak and Dagger, Part 2 of 2" is a Star Trek: The Original Series comic published by Marvel Comics in 1997, it is the sixth issues in the Star Trek: Early Voyages series, and the second issue in the two-part story Cloak and Dagger. The story, by Dan Abnett and Ian Edgington, sees the USS Enterprise and crew in conflict with the lost Vulcan colony the Last-of-all-Cities.

With Captain Pike away, the USS Enterprise is left to face the assault of a horde of rebellious Vulcans! And these rambunctious rebels don't intend for our heroic crew to live long or prosper!

As the USS Enterprise drifts crippled in space the Vulcans start to beam in. On Darien 224 Captain Christopher Pike is concerned, out of contact with his ship. On the bridge the crew put up a valiant fight. While in engineering Wright desperately calls the bridge for assistance as a Vulcan approaches; he is saved by Moves-With-Burning-Grace, armed with his battle lance. Driven off, the Vulcans retreat back to the USS Cortez.

Number One has Mister Tyler call up the frequency modulation of the Cortez's shields and takes them offline; leaving the ship vulnerable to a volley of photon torpedoes. The attack takes out the Cortez's artificial gravity. With a pause in the attack, Number One has repair teams get to work on the Enterprise.

On Darien 244 Sutek reports long range ground sensors have monitored the battle and that the Enterprise survives. Though conflict continues on the planet, in verbal attacks against the pacifist ideals of modern Vulcans and the Federation. Pike is eager to contact his ship, but T'Kell reminds him of the difficulty in communicating through Darien's atmosphere, he has to wait, content he has the Vulcans hospitality.

Repairs are well underway, although we are still unable to contact the Captain or the landing party. Given our current circumstances, the welfare of the ship and crew are my highest priority now.

At a senior staff meeting Nurse Carlotti reports five are dead and twenty-nine injured. Grace reports the ships circuits have been reduced to slag by the Vulcan weapon, the shields were spared the worst but probably won't survive another attack. Number One has Mr Tyler reroute all power to shields and sensors, wanting not be caught out the next time the Cortez attacks.

In their accommodations on Darien the Starfleet personnel discuss the situation; Spock believes T'Kell's people to be no more trustworthy than the renegades, he suspects she plans to return to Vulcan with their telepathic weapons as conquerors. Sutek enters; the group has been summoned by T'Kell.

T'Kell welcomes the group to the Tabernacle of sharp conflict and informs them of her plans. Pike is to return to the Enterprise on the shuttlecraft the landing party came down in and make arrangements for the relocation of the Vulcans. En route he will act as bait for the Cortez, drawing it into the sights of the vorl-tak, a massive psionic weapon which harnesses the planet’s gravitational field as a psionic amplifier. As Spock warns, the weapon could potentially destroy the planetoid.

Spock points out that the weapon could be used to construct an impulse engine; they need not resort to genocide. For this Sutek strikes him down. Pike agrees to do as T'Kell demands, if T'Kell calls Sutek off of Spock.

On the Enterprise, Pike hails, he is on his way but under attack by the Cortez. The Enterprise moves to intercept while on the Cortez the Vulcans have their weapon charged to fire. Below, Spock makes one more futile attempt to persuade T'Kell her actions are unnecessary, but his logic cannot sway her passion, the Vorl-tak is fired, and the Cortez is blown to pieces.

On the Enterprise, Pike gets to the bridge to Number One's report that Darien is disintegrating; still not able to communicate with the landing party, and not willing to leave them to die, he orders Mister Tyler to take the Enterprise into the planetoid's atmosphere.

Below, Spock does his best to pull T'Kell out of danger, as she utters her dying words; instructing Spock to remember these Vulcans. The landing party is beamed to safety. The Enterprise then pulls away and safe from the planetoid's destruction.

Captain's Log, supplemental.
The Enterprise has taken a serious pounding, nothing an overhaul and some R&R won't put right. However not all out problems can be so easily solved. I deeply regret the fate of the Vulcans of Darien 224. I sincerely wish it could have been otherwise, and I know I'm not the only one.

Pike goes to check on Spock, who is performing a ritual to purge what emotions he had; allowing his intellect and logic to take their "proper place". The incident has lead Spock to an understanding of the Vulcan people. "Passion kills Captain. Logic does not".

A stardate of 2396.6 is given in the story, which is assumed to take place in sequence with the rest of the Star Trek: Early Voyages series, circa 2254.

c. 3rd century
Prior to the Time of Awakening the Vulcan saw periods of war, using psionic weapons. (Events referenced in relation to origins and behavior of the Last-of-all-Cities Vulcans)
Stardate 2396.6 (c. 2254)
The USS Enterprise is embroiled in an internal conflict between opposing groups from the Last-of-all-Cities colony. In the process the USS Cortez and Darien 224 are destroyed by the vorl-tak weapon. (Events of the comic.)

"Anyone so much as raises an eyebrow we'll drop you where..."

"Your Federation is weak... an empire built on sand... ours is built on rock!"

The Vorl-tak destroys the Cortez

The Tabernacle of sharp conflict 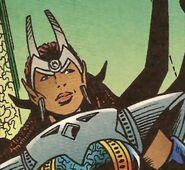 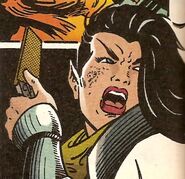 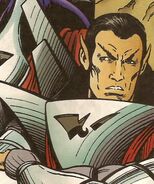 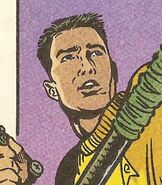