It is a scientific truth that the structure of the universe depends on the amount of "dark matter" contained in the cosmos. When sinister forces threaten to tamper with the very nature of reality, Captain Janeway and the crew of the USS Voyager must risk everything to restore the universal balance…

Years ago, near the beginning of its long journey, Voyager made contact with a brilliant Romulan scientist whose present was Voyager's past. Now Telek R'Mor communicates with Janeway again—to warn her of a dire plot to capture Voyager and turn its "future" technology against the Federation of yesterday. But more than just the timeline is at stake. Voyager itself may be carrying a menace deadly to all creation!

On Romulus, Lhiau, a member of the alien race who calls themselves the "Shepherds" offers the Senate a cloaking device that cannot be detected by any means and allows firing weapons while cloaked. This is gratefully accepted, but there is some suspicion as to what they want in return.

A number of wormholes of various sizes have been opening near Voyager and they appear to be getting closer to the ship. It is eventually discovered that they have been opened by Telek R'Mor, the Romulan scientist from the past they previously contacted via a wormhole, which he reveals was actually an artificial wormhole created by him. He is a member of the Tal Shiar, and they have threatened to kill his wife and daughter if he doesn't cooperate and open a wormhole to the Delta quadrant so that they can capture Voyager and return to their own time with future Federation technology. The Tal Shiar invade his ship, and Janeway beams him to theirs before he is captured.

Meanwhile, the Voyager crew has been experiencing a wide range of physical and mental issues, which is readily apparent when the mild-mannered Neelix attempts to kill Telek R'Mor. The Romulan scientist reveals that this, as well as equipment failures on the ship, are side effects of mutated dark matter that are unleashed by Shepherd technology, which were used for creating the wormholes.

Naomi Wildman has been confined to the cargo bay and discovers a "ghost", a man who moves without being visible. This turns out to be a Romulan spy using a personal cloaking device, although his body eventually fails due to exposure to dark matter. Janeway asks Telek R'Mor to attempt to find other members of the Shepherds in the hopes that Lhiau is a renegade and they can help. To their surprise, they discover a planet with such a signal. They arrive to find a civilized planet, but in an instant it is devastated.

Janeway leads an away team to the planet where they discover a Shepherd in stasis. She removes the mutated dark matter from Voyager and her crew and tasks them with a "quest" to remove other sources of mutated dark matter in the Delta Quadrant before it eventually spreads and kills others. 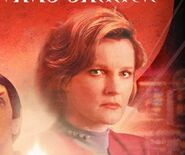