For other uses, see Communication Breakdown.

3623.5
"Communications Breakdown" is the third of five TOS manga stories in the 2007 anthology Kakan ni Shinkou (To Boldly Go), published by TokyoPop, written by Christine Boylan and drawn by Bettina M. Kurkoski. This is the story of Nyota Uhura's first day back at her post after the Nomad probe wiped her memories, in TOS episode: "The Changeling".

Captain's Log, Stardate 3623.5.
It has been twelve days since Nomad, an antiquated Earth probe reprogrammed for genocide, wiped Lt. Uhura’s brain of its language and learned memory. She has spent every waking moment re-educating herself to her former adult levels. After holding in orbit to exact immediate repairs, we have just left the Malurian star system on a course for a Starfleet facility for further ship servicing.

After receiving a distress call from Malur, Starfleet orders the USS Enterprise to reverse course. Montgomery Scott reports the ship is in dire need of repairs and could function for four more days at most.

Escorted by Christine Chapel, Uhura returns to the bridge for her first day back to work after the Nomad attack. Young Ensign Hodge seems overwhelmed with the communications board, and Uhura takes over as channels are disrupted during the ship's passage through an Oort cloud. Uhura is able to resolve a garbled distress call, but reports something unusual in the message, an undertone that could put them in danger. Doubting her abilities and with no scientific explanation to back it up, James T. Kirk temporarily relieves her of duty.

As Kirk, Spock, Leonard McCoy, Hodge and another ensign are beaming down down to Malur, Uhura pulls the ensign off the pad and beams down instead. McCoy claims he allowed her to come, but Kirk sees through the lie. Nonetheless, despite the insubordination, he orders her to stay and justify being there. An automated planetary defense system suddenly fires at the ship. Spock has Pavel Chekov track the source and return fire.

Meanwhile, Uhura finds the main signal coming from a communications tower and the source of the secondary signal hidden within, and tracks it to its source, finding a Malurian survivor. He says he'd been on a prison transport during the attack, and that he didn’t kill his guard or the driver of the transport. The grifter said he'd gone legit out of necessity, that four planets worth of goods are his to sell, and the message was a global estate sale. He fired at the Enterprise knowing a starship was unlikely to be buyers. He told Kirk, "Those in the know can de-code the undertone. They have special equipment. Not my fault you didn't understand it. Your communications officer did."

Kirk wants to take the grifter to Starfleet Command where they can seek other Malurians, but the survivor doubts Starfleet would help a common criminal like him. Uhura suggests a compromise where the survivor uses his tech from Malur to look for survivors off-planet, with a relay set up to direct survivors back home. Kirk said an ambassador would review the case of the survivor’s estate sale. Kirk apologizes to Uhura for doubting her. 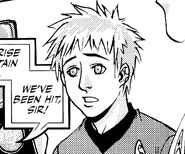 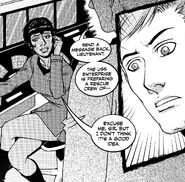 Suspicious of the distress call.