The Original Series (IDW ongoing) No. 60

BLOCKBUSTER SERIES FINALE! A Five Year Mission = five years of STAR TREK comics! Celebrate the end of the latest chapter in the Enterprise's epic adventures with this all-new story that brings Captains and crews from two different timelines together!

Previously in Star Trek…
Two Enterprises—with two crews, matched in name but not appearance—encountered the same anomaly in deep space at the same time. The anomaly caused the minds of the two crews to transfer between their alternate selves. When each ship recovers a probe sent by the other to investigate the anomaly, the mystery only deepens...

In sickbay, Leonard McCoy examines Spock and Scotty but can find no sign of any sort of ailment before Kirk is called to bridge. Leonard McCoy protests against bringing Spock and Scotty with him to the bridge but Kirk insists to needing both their brains on the problem, regardless of which Spock and Scotty they are. On the bridge, Pavel Chekov and Nyota Uhura reveal their theory that the anomaly requires help while Nyota Uhura theorizes that the anomaly is in fact sentient energy. Concurrently, both Uhuras play the message they have deciphered:

"Minds we meet. Minds same. But not same. Trapped with you. We cannot pass. Our infinite lost."

Both crews theorize that the entity has somehow become trapped between the two universes, existing in both universes at once and is affecting an information exchange between both crews. As they set to work freeing the entity, Kirk observes Hikaru Sulu expressing unfamiliarity at his console while Kirk witnesses a lack of familiarity between Spock and Uhura as Hikaru Sulu attempts to deduce the functions of his console. Spock then briefs Kirk on the possibility of using a modified photon torpedo to free the entity before it unleashed an energy burst that returns everyone to their bodies but causes the two bridges to merge together. Both ships fire a torpedo, successfully freeing the entity.

Soon enough, everything has returned to normal with Kirk greeting Janice Rand before commenting to McCoy that the alternate Bones appeared to be in excellent physical condition. Kirk notices with some humour that Spock and Uhura have regained their sense of familiarity. Both captains find however that their computers contain some leftover data from the alternate Enterprise containing everything from schematics to personal logs. Both Kirks decide to lock away the data but are unable to resist taking a peak at the biography of their counterpart and the lives they might have lived. Yet despite all the differences, both Kirks take solace in the similarities and that Starfleet's mission of peaceful exploration exists in both worlds.

the galaxy's Alpha or Beta Quadrants 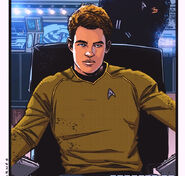 Subscription Variant
Add a photo to this gallery

Retrieved from "https://memory-beta.fandom.com/wiki/Connection,_Part_2?oldid=664200"
Community content is available under CC-BY-SA unless otherwise noted.