For other uses, see corona.

The Original Series No. 15

An awesome, sentient force of protostars - Corona - has taken control of a stranded team of Vulcan scientists. The Enterprise has come on a rescue mission, with a female reporter and a new computer that can override Kirk's commands.

Suddenly, the rescuers must save themselves and the entire Universe before Corona unleashes a Big Bang!

The Enterprise has been chosen to trial new computer monitors that are capable of overriding command and medical decisions. A reporter, Rowena Mason, is on board to observe the trial. However, Starfleet then receives a decade-old emergency message from Station One, orbiting the Black Box Nebula, and the Enterprise is sent on a rescue mission.

The mostly Vulcan staff are led by T'Prylla, who advocated a different way of making logical deductions by intuition. However, the staff behave strangely and are reluctant to allow the members of their personnel held in suspended animation to be taken back to the Enterprise for revival. McCoy hits a further stumbling block when the monitors deem them legally dead and refuse to revive them.

Chekov comes under the influence of the intelligence controlling the Vulcans and sabotages a shuttlecraft. However, Kirk and Spock had anticipated it and shield both him and T'Prylla from the effects of Ybakra radiation which the intelligence has been using to control them. T'Prylla explains the intelligence - Corona - first infected her children, Radak and T'Raus, and used them to control the others. Radak is sent to sabotage the Enterprise but the ship takes him clear of Corona's influence.

The Enterprise attempts to beam up the landing party but Spock and Mason are left behind. Spock transfers a small part of his consciousness to Mason before Corona can control him, allowing her to mind meld with T'Raus; T'Prylla does the same to Radak, depriving Corona of its mediums. It transpires Corona was one of a number of beings who existed in the few minutes after the creation of the universe. It sees the universe as dead and wishes to return it to its former state.

Kirk tries to reason with Corona but the monitors take over and fire upon the station in an attempt to destroy Corona's machinery. However, Corona is affected by Mason's emotional plea, recognising the life in the universe for the first time. It abandons its plan and convinces the monitors to revive the hibernators. 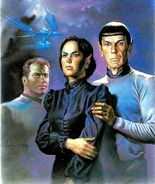 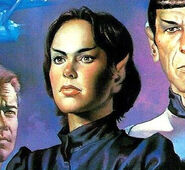 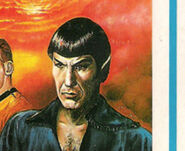 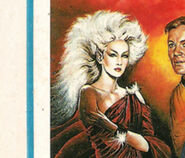