64333.4
The official prequel to the motion picture.

The countdown to the motion picture event of 2009 begins here, in the exclusive comics prequel to the upcoming blockbuster Star Trek! J.J. Abrams, Roberto Orci, and Alex Kurtzman present the origin of Nero, the mysterious Romulan who will ultimately threaten the survival of the entire universe. Don't miss this first chapter in the story that brings Star Trek back to the big screen!

In the Hobus system, the Narada, a Romulan mining ship under the command of Captain Nero, is in orbit of a barren planet. Aboard the ship, Nero and his crew are preparing to extract minerals from the planet. His second-in-command, Ayel, informs him that they have achieved depth and that the extraction team is prepared to launch at Nero's command. Upon hearing that core samples from the planet contains large deposits of decalithium, a rare isotope which holds great value in the Romulan Star Empire, Nero gives the order to begin extraction.

Before they can begin extraction, however, Narada's sensors detect extreme fluctuations coming from the Hobus system's star. Nero orders the extraction crew to disengage and return to the Narada, after which a massive solar flare erupts and heads towards them. With interference from the star preventing transporter use, Nero sends an evac shuttle to retrieve the extraction team. Nero orders the helm to lay in a course for Romulus and to engage as soon as the shuttle returns. Ayel tells Nero that they cannot leave without retracting the drill, to which Nero replies that they have no choice. With all crew members safely aboard, the Narada warps out of the star system as the solar flare envelops the planet.

On Romulus, Federation Ambassador Spock is preparing to address the Romulan Senate.

"Romulus. My home for the past forty years. When I first came here I was with the underground reunification movement. Hiding in tunnels, working in shadows. But slowly I saw those few Romulans who were open to outside ideas grow into many. Romulan society went through several years of transformation. Curiosity, tolerance, and diplomacy ceased to be forbidden words in the Empire. Finally, immigration laws were passed, and I was allowed to live legally on Romulus. After years of covert resistance, I could finally assume the role of Ambassador and work for peace without fear of reprisal. But there is still a long way to go."

Spock presents his case to the Senate: the Hobus star is dying, and will soon go supernova, and the Romulan Empire is in danger because of it. He reveals that the star's eruption days earlier not only obliterated the planet but converted the planet's mass into energy, increasing the star's power. More eruptions have occurred since then and the star's power is increasing in intensity. It is Spock's belief that, once the star goes supernova, it will devour not only nearby systems, but the Romulan Empire, as well. His proposed solution is to use decalithium to create highly volatile "red matter," which can be used to create an artificial black hole that can devour the Hobus supernova before it spreads. However, the technology used to process decalithium into red matter can only be found on planet Vulcan.

Spock's solution creates a stir in the Senate, and one senator accuses Spock of being involved in a Vulcan plot against Romulus. The Praetor calls order amongst the senate and apologizes for his colleagues. However, the Praetor is unconvinced that the Hobus star is a threat to the Empire, as Romulan scientists studying the star did not come to the same conclusions. He also assured Spock that the Romulans would not simply hand over a rare and valuable material such as decalithium to the Vulcans, despite Spock's good intentions.

At this point, Nero, who is representing the Mining Guild, calls for a point of order. Upon being recognized, Nero tells the Senate how he and his crew witnessed the star's first eruption and how they barely escaped with their lives. He defends Spock, stating his belief that the Ambassador's conclusions are not far-fetched and that the Empire is running out of time. The Praetor dismisses Nero, however, referring to Spock's conclusions as hasty, drastic, and in need of further investigation. The Praetor then pronounces the proceedings to be closed.

That night, Nero is at home with his wife, Mandana, who is pregnant. Nero tells Mandana that he would never betray the Empire, but he must do something about the star even if it means disobeying the Senate. Mandana replies that he has a loyalty to himself as well as the Empire, and that he will never fail as long as he does what his heart tells him. Later, Nero meets with Spock and offers his services and those of his ship and crew to mine the decalithium Spock needs. Spock reminds Nero that he would be disobeying the Senate and if he is caught, he would spend the rest of his life in prison, never to see his family again. Nero replies that if he does nothing, he would lose his family anyway, and he would do anything to save his wife and the Empire. After looking through Spock's telescope and seeing how massive the supernova has become, Nero tells the Ambassador they must leave now. As Nero leaves to round up his crew, Spock thanks him for his help and his trust.

Nero convinces his crew to take part in the mission, despite their reservations. As he is about to depart, Nero says goodbye to Mandana, promising to be back before their child is born. Mandana then reveals that their child is a son, and proclaims that he will be a miner like his father. Nero and his crew then depart with Spock. Aboard the Narada, Nero tells Spock that his decision to help him was rash and wonders if he can really trust him. To this, Spock offers to mind meld with Nero, to show that he is telling the truth. Nero agrees, but breaks off the meld after seeing images of Mandana.

In the Kimben System, the Nerada begins mining a planet for decalithium. Suddenly, three Reman warbirds warp into the system. Before Nero can raise shields, several Remans transport onto the bridge and take over the ship. Nero's female crewmember manages to grab one of the Remans' disruptors and aims it at the leader of the intruders, demanding that they drop their weapons. Just then, the Narada is rocked by an explosion outside the ship: a Federation starship has begun attacking the Reman vessels.

The commanding officer of the Federation ship hails the Remans:

"Attention, Reman ships! This is Captain Data of the U.S.S. Enterprise. You will cease hostilities at once."

The Narada escapes the Hobus supernova. 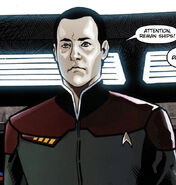 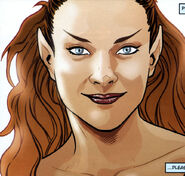