The Original Series & The Next Generation

prequel to STAR TREK, the motion picture event of 2009! The Romulan villain Nero continues his vengeful crusade against the Federation. Don't miss any of the action as the clock ticks down to the premiere of STAR TREK this summer!

Aboard the Narada, looking upon the remains of Romulus, a grief-stricken Nero laments the loss of his wife, his unborn son, his family, his people, and his homeworld. Three Federation Olympic-class hospital ships, which were sent to evacuate Romulus, arrive hail the Narada, asking if they can lend assistance. Nero – who suddenly feels strangely calm – replies that he has several injured refugees and requests that they be beamed aboard, and the ships lower their shields to prepare for transport. It is a trap, however: Nero believes the ships did not arrive after the destruction of Romulus by accident, reasoning that the Federation is there to claim Romulan space for their own. He thus transports explosive mining devices to all three ships, destroying them.

Later, the Narada is hailed by the Ruling Council of the Romulan Senate, who have escaped on a Senate shuttle. Nero brings the Council aboard; among them is the Praetor, who carries with him the Debrune Teral'n, an ancient weapon which serves as the greatest symbol of the Empire. The Praetor tells Nero the survival of the Senate will ensure the survival of Romulan civilization. Nero responds that their civilization is dead, and that it died when the Senate ignored his warnings about the Hobus star. The Praetor counters that "humble miners" should respect the heavy responsibility of their leaders; he intends to find a new home for the Debrune Teral'n, a burden which Nero should be fortunate is not his. At this, Nero grabs the weapon and kills two Senators and the Praetor, "relieving" him of his responsibility. He then asks the surviving two Senators how they intended to rebuild the Empire, threatening them with the Teral'n.

With their friends and families dead and their homeworld destroyed, Nero and his crew take part in a Romulan tradition. According to the tradition, when a loved one died, the mourners painted ancient symbols of love and loss onto their skin, indicating grief. In time, the paint would fade, which meant that the mourning period was over and life went on. Rather than using paint, however, Nero and his crew tattoo the symbols onto their skin, making them permanent. As Nero laments, life does not go on; they died with their loved ones and their planet, and all that is left is revenge.

Meanwhile, on Vulcan, Spock and Ambassador Jean-Luc Picard discuss the continuing threat of the Hobus star. The destruction of Romulus was only the beginning; the more the supernova destroys, the more it grows, and within weeks, it could reach both Vulcan and Earth. The only way to stop it is to use red matter create a singularity in the star's core that would devour it from within. A Vulcan councilor reports that they have already begun processing their decalithium stores into red matter, with favorable results. In order to get close enough to the center of the star to deliver the red matter, Ambassador Spock proposes the use of a prototype vessel known as the Jellyfish, which was designed to withstand unstable atmospheres. The ship's designer and pilot, Geordi La Forge, has agreed to lend his support.

Elsewhere, the Narada crew discover the existence of a cloaked military facility known as The Vault, using an encrypted code acquired from the murdered Senate. The Vault's existence was known only to the Romulan High Command; its purpose is to provide a safe haven for the ruling council in the event of a threat to the homeworld. Nero gains entrance to The Vault, stating that the Praetor gave Nero his Senate codes and the location of the facility before dying of injuries sustained in the destruction of Romulus. Aboard the facility, Nero meets Commander D'Spal, who explains that The Vault is the rendezvous point for what remains of the Romulan fleet.

Nero asks D'Spal for weapons to help the Narada survive the current crisis. She introduces him to an advanced weapons system of Romulan design which utilizes retrofitted Borg technology. In addition to giving their ships warp, cloaking, and sensor capabilities superior to those of Federation vessels, it also uses self-repairing nanotechnology which can fix any damage and allows it to anticipate potential threats and modify its systems accordingly. As Nero looks on in awe, D'Sal states that the Narada would make a fine prototype for this weapons system.

Back on Vulcan, Geordi has arrived with the Jellyfish. He greets Picard, Spock, and Captain Data, noting he thought he had left all the adventure behind when he left Starfleet to design his own ships. In a laboratory where the red matter is being developed, Data reveals the details of their plan to La Forge: a single drop of red matter will be fired from the Jellyfish into the center of the Hobus star, creating a "unique singularity" (a "homemade black hole," as La Forge notes), which will absorb the supernova's energy.

At The Vault, the Narada has been out-fitted with the Borg weapons system. D'Spal reveals that she knows Nero's true intentions – to avenge the destruction of Romulus – and she wants to help him do it. The Narada is capable of bringing their enemies to their knees, and Nero intends on starting with Vulcan.

On Vulcan, La Forge and Data reminisce while the Jellyfish is being modified to safely carry red matter. In Ambassador Picard's quarters, Picard and Spock discuss the discovery of the bodies of the Romulan Senate floating in space, near the last known location of the Federation ships that were sent to evacuate Romulus. There are no signs of the Federation ships, and over the past few days, there have been reports of other ships vanishing near Romulan space, not only those of the Federation, but those belonging to the Cardassians and the Klingons, as well. Spock theorizes that Nero is behind all of this, a frightening aspect given Nero's warning that he would blame Vulcan should Romulus be destroyed.

Spock reveals that he will be piloting the Jellyfish rather than La Forge, since there is a high probability that whoever carries out this mission will not return; La Forge is still a young man, but Spock is "reaching the end of [his] adventures." Spock also feels obliged to carry this mission out to the end, as it was he who first warned of the star's danger and who failed to predict when it would go nova. Picard expresses his understanding, and assures Spock that he has made arrangements to prevent Nero from carrying out his threat to Vulcan.

Elsewhere, the advanced Narada has just finished destroying another Federation vessel. Nero gives the order to prepare the Narada for the final warp to Vulcan. Ayel expresses reluctance at this, reminding Nero that they are miners, not soldiers. He suggests that they wait until the Romulan fleet has been reassembled. Nero replies that there is no time for that, as Spock and the Federation are no doubt racing to save Vulcan. He tells Ayel to trust his captain, just as he trusts his crew; they are all ready.

Suddenly, the Narada is struck by weapons fire. Multiple Klingon Birds-of-Prey have decloaked and surrounded the Narada. One of the attacking ships hails the Narada, informing the crew that they are wanted for crimes against the Klingon Empire for violating their borders and slaughtering their citizens. The Klingon gives Nero and his crew a warning:

"I am General Worf of the Klingon Empire. You will surrender your ship to us. Or you will die with it." 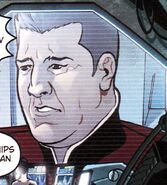 The USS Galen and her two sister ships being destroyed

The Narada is refitted at The Vault