Countdown to Darkness No. 2

On a routine mission to Phadeus IV, the Enterprise is bombarded with high-energy transmissions that block their coms and disrupt transporter beams. Captain James Kirk leads an away team to determine the source of the interference... and discovers Robert April, the long-missing-and-presumed-dead captain of... the USS Enterprise!

Captain Kirk is dumbfounded when Robert April is revealed from the shadows, saying that he's supposed to be dead.  According to Starfleet records, Kirk cites, April died commanding the Enterprise two decades ago, and is suspicious of the man they are currently seeing before their eyes.  April quips that he must either be his ghost or twin brother and asks him that if he truly is in command of the Enterprise, he wonders how's his ship doing.  Kirk points out that his Enterprise was decommissioned two years ago, and he boldly states he's got the new one.  He also blames April's Phadean army for shooting them down, but April is quick to defend his colleagues, saying that it wasn't them who shot them down.  He says that they have dropped right into the middle of a civil war and that Kirk was lucky to land on the right side of the conflict.  He offers Kirk and Spock to accompany him somewhere but then their area is rocked by enemy fire.

The enemy fire forces them to flee into a cave, which April seals the entrance with Kirk's phaser.  Kirk worries for Sulu and Hendorff, but April is quick to state that his men will take care of them both.  Meanwhile, back on the Enterprise, Uhura worries for the fate of the landing party, and decides to go after them.  McCoy is quick to stop her, stating that while they'll eventually be overdue for an update on their whereabouts, he's been hearing complaints from Kirk that he needs a little shore leave and thinks that this will do him good.

Back on the surface, Kirk wonders what April is doing on Phadeus IV. April says it's a long story, but one he's willing to share.  But first, he is quick to point out that Kirk has a chance to make a difference in the Phadean civil war.  April then begins to tell his story.  Two decades ago, his Enterprise was the first Federation starship to visit Phadeus, and like now, it was a routine survey mission.  At this point in his career, he had been in command for a decade and felt more at home on the ship than back on Earth.  April is quick to say that while Kirk may not feel that way just yet, eventually he will.  He jumps back to his story, and at this point the Phadean civilization had entered into the Iron Age.  There they met the Shadows, a subspecies of the Phadean people who looked similar, the only difference was the color of their skin.   From a perch above, they were witnessing the Shadows committing genocide and because of the Prime Directive, there was nothing they could do.  However, April took action.  He lied to his first officer on his whereabouts, gathered as much technology and weapons he could carry, relieved the ensign in charge of the transporter room and transported down to the surface.

Spock is quick to say that April committed the most egregious violation of the Prime Directive.  According to protocols, April's first officer should have relieved him for dereliction of duty.  April quickly asks Kirk of his relationship with Spock.  Kirk notes that it is an evolving relationship as they have not been working long enough, and Spock agrees.   April hopes that eventually the relationship between Kirk and Spock will be as strong as the one he had with his first officer, Alexander Marcus.  He also says that Marcus just wasn't his first officer, he was also his best friend. Marcus was the one who ended up telling April's crew, Starfleet and his family that he was dead. Marcus also was the one who didn't stop April from what he was doing and his being here now showed much trust Marcus had in him.  Kirk wonders how he got additional supplies, and says that he knows his way around and states the galaxy is such a big place.

Back on the Enterprise, McCoy says that since Uhura is in command, she is allowed to sit in the Captain's chair, but refuses.  Uhura says they're long overdue and decides to finally go after them, but then Chekov reports that a small vessel is approaching the planet.  Uhura opens a channel, and a Bajoran woman appears on the viewscreen.  She says that she's here to deliver supplies to Robert April.  When Uhura asks who the woman's identity is, she says that her name is Mudd.

On the surface, Kirk finds out that Sulu and Hendorff have been captured by the Shadows.  April had lied to them, saying that his men had rescued him in order to follow April.   April pleads with Kirk to end the civil war once and for all by asking him to use the Enterprise to destroy the Shadows.  Kirk refuses outright, and April is quick to point out that like it or not, they were involved the moment they decided to take a closer look at what was going on.  He decides to get Sulu and Hendorff out quickly and quietly and as soon as they do that, they're going back up to the Enterprise and placing April in a holding cell.  He starts his journey and thinks that Spock is right behind, but he is nowhere to be found... 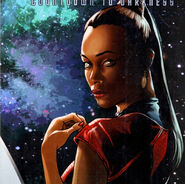 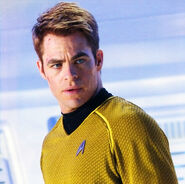