unknown
Creeping Death was a 12-page Star Trek: The Original Series comic strip. It was the 27th weekly story arc in the UK comic strips series, published in six installments in Valiant and TV21 in 1971 and 1972. In this story, an enveloping fungus threatened to destroy the USS Enterprise.

Two shuttlecraft had left the starship Enterprise to begin exploration of a planet classified Kappa Delta in a previously unexplored system. As they entered thick cloud cover, the men inside little knew that the sinister defences of the planet had already claimed them! Strange, fungus-like growth, spreading fast from the point of impact of tiny, light-accelerated particles…

Excited about a newly-discovered planet, Kirk joins two shuttlecraft crews to explore the surface. Before they can land, however, growths of wild fungus suddenly appear and spread rapidly across the ships' hulls. The excess weight destabilizes the ships, destroying one against a mountain, while the other crashes into a lake. The fungus dissipates in water, allowing Kirk, Spock and five crewmen to escape in a life raft, only to be captured and deposited in front of a Graktan firing squad.

At the last moment, Graktan's leader Lektor saves them – he thought they were invading Themerians. He apologizes deeply for the mistake and loss of the other shuttle's crew and extends them full hospitality. But the group soon discovers that the planet's defensive fungus has also been set on the Enterprise, disabling their communications, engines and shields. The starship is being pulled helplessly into the gravity well of the star Kappa.

To rescue the Enterprise, Kirk, Spock, and Lektor blast off with a crew in a Graktan battle cruiser. They are forced to disable two attacking Themerian raiders, then approach the crippled starship. They explode probes against the ship's communications array to clear it of fungus. Now able to contact the ship, Spock tells Montgomery Scott to flood the fungus with water. Scott diverts the full output of the ship's water-generating plants onto the hull through airlocks, dissipating the fungus. Scott is then able to restart the ship's engines and pull away from the star.

Kirk considers the bright side of the near-disaster: they have forged a friendship with the Graktans. 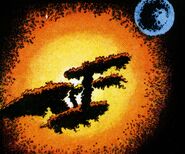 Enterprise trapped near the star Kappa. 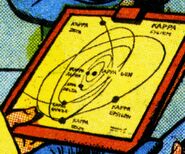 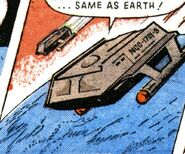