For other uses, see Havoc.

War and Madness No. 5

48275.8
War and Madness (Part 5 of 5) — "Cry Havoc" was the 75th issue of DC Comics' 1988 series of Star Trek: The Next Generation comics. It is the final segment of the War and Madness story arc written by Michael Jan Friedman, drawn by Gordon Purcell and Terry Pallot, and published in 1995.

The extra-sized Star Trek: The Next Generation #75 concludes the five-part “War & Madness.” Those responsible for setting the Federation, the Klingons, and the Tholians at each other’s throats are revealed. Plus, the Borg are back, and the Enterprise crew’s one chance to stop them may be to reach Hugh, the Borg they once befriended. But with Hugh’s location believed to be somewhere deep within Tholian space, Commander Riker, his father, and several USS Enterprise officers must commandeer a Tholian starship on a covert mission across the Tholian border.

With reluctant approval from Gowron, Tholian First Officer Nethrax agrees to take Narqal on a risky mission to track down and confront the IKS Taj, which was responsible for kidnapping Tholians and assaulting Tholian outposts. William T. Riker, Geordi La Forge, Data and Tholian military expert Kyle Riker join him, along with a skeleton crew of Tholians.

The rest of Narqal's personnel remain aboard the USS Enterprise-D for their own safety. Their comatose commander revives in sickbay and, despite Beverly Crusher's assurances, he assaults several security officers and takes Brenda Sorenson as a hostage. He demands his ship back and for his crew to be set free, believing that his first officer has become a traitor. Jean-Luc Picard stalls him as long as he can.

Narqal successfully passes a Tholian security checkpoint and locates the Taj. The crew of the bird of prey had been killed by radiation poisoning from a spacial anomaly near Ohniaka III, where the empty vessel was taken over by Liberated Borg led by rebel Enab. He was driven on a quest to steal the secrets behind the Tholian hive mind, an organic collective, but his efforts to kidnap and study dozens of Tholian scientists lead to them becoming mindless, as there is no longer a Tholian collective.

When the Taj attacks Narqal, Riker is inspired to fire at the Klingon ship's navigational deflector, knowing that Borg would have modified it for transwarp propulsion. They succeed in disabling the bird of prey, and turn its Taj crew over to the Tholians for trial. Narqal returns the Taj to the Enterprise, where Nethrax updates his commander, who is dumbfounded at learning the truth, and proudly reinstates his first officer.

On Ohniaka III, Picard tells Hugh about the fate of the rebel Borg. He finds it ironic that Enab sought a collective that no longer exists.

Sorenson, who had been held hostage, breaks off her engagement with Kyle Riker, having realized she would face such constant danger if she married him. She confessed to Deanna Troi that Will Riker's discomfort at their marriage was the true reason behind her decision, because of her experiences with her own father. Will eventually convinces her to go ahead with the marriage.

Captain's log, supplemental.
I have managed to get both Nethrax and the Klingons to agree on the necessity of this mission. I only wish I was a certain about its outcome.

First Officer's log, supplemental.
Despite our success in locating the Klingon raider… First Officer Nethrax continues to look plagued by doubts. I have to wonder if he might not be having second thoughts about helping us. After all, it's so difficult to know the Tholian mind.

First Officer's log, supplemental.
Are we being led into some kind of trap? It wouldn't have been too difficult for our friend Nethrax to secretly alert his fellow Tholians that we were coming. I'm out of my element here. I've got no choice but to trust Neethrax… and my father's judgment.

Captain's log, supplemental.
How long can I keep up this deadly poker game… before the Tholians call my bluff?

First Officer's log, supplemental.
The checkpoint ships are veering off. Looks like I was wrong about Nethrax. Our trust in him was well-founded after all.

Captain's log, supplemental.
Their flagship repaired, the Tholians have taken their leave of us. Nethrax has been reinstated as first officer, in recognition of his contributions to peace. If I may say so, that recognition is well-deserved. I can only hope that this will be the start of improved relations with the Tholians—perhaps even some sort of diplomatic ties… However, I am by no means counting on it.

Captain's log, stardate 48275.8.
My suggestion that Hugh lead his people was a good one—if I do say so myself. I am hopeful that the Enab incident was nothing more than an aberration… and that this Borg society will develop from this point on without any significant setbacks. 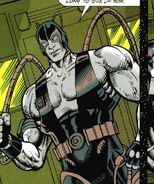 Enab.
Add a photo to this gallery

Retrieved from "https://memory-beta.fandom.com/wiki/Cry_Havoc?oldid=734102"
Community content is available under CC-BY-SA unless otherwise noted.