For other uses, see Cry Vengeance.

"Cry Vengeance" is the lead story in the third issue of John Byrne's Star Trek: New Visions comic series. It was published on October 22 2014 and is a sequel to TOS episode & Star Trek 3 novelization: The Doomsday Machine.

John Byrne continues his new Star Trek photonovel adventures with two tales for the price of one, as the crew of the Starship: Enterprise faces a menace three million years in the making, plus something more recent but no less deadly. Presenting a follow-up to the classic episode "The Doomsday Machine", as well as "Robot", a brand-new tale of murder and mystery.

Captain's log, stardate 4203.4
Mr. Sulu's course has brought us back to the drifting hulk of the "doomsday machine". Our task now is to carry out technical inspection of this mysterious artifact, until a Federation science team arrives to complete the job.
I have come to my cabin, to clean up after the grueling hours aboard the Constellation. Yet I am drawn again and again to the images on my monitor screen. As the Enterprise passes repeatedly over the skin of the monster machine, allowing Spock to take his readings, I find myself for the first time realizing just how enormous this thing really is. Even as I drove the wreck of the Constellation down its gaping maw, the small screen on that ship's auxiliary bridge give me little opportunity to assess the size of the machine.

Captain's log, supplemental
The bizarre pursuit continues, twenty-two hours, now, and the alien shows no sign of relenting in the chase.
Mister Spock maintains his monitoring of the alien's condition, looking for any sign this gamble may be working... Meanwhile, I have taken Engineer Scott's report on our present condition. 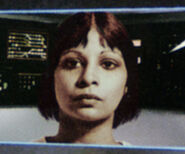 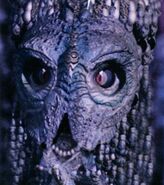 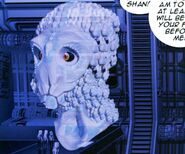 Front cover.
Add a photo to this gallery

Retrieved from "https://memory-beta.fandom.com/wiki/Cry_Vengeance_(TOS_comic)?oldid=686043"
Community content is available under CC-BY-SA unless otherwise noted.