5216.4
"Cura Te Ipsum" is the first of five TOS manga stories in the 2007 anthology "Kakan ni Shinkou" (To Boldly Go), published by TokyoPop, written by Wil Wheaton, drawn by E.J. Su, with shading by Chow Hon Lam. In this story, a devastating explosion left the Enterprise stranded without warp drive, hoping to find replacement dilithium on a nearby warring planet.

Kakan ni Shinkou back cover
Scotty has to extract dilithium crystals from a mine in the middle of a war zone...

Captain's Log, Stardate 5216.4.
A catastrophic accident has crippled the ship and claimed the lives of a Starfleet dilithium specialist and several engineering crewmen. The loss of life, while certainly tragic, is the least of our worries. Dr. Hackard's experiment has thrown us lightyears from our previous position and overloaded several of the Enterprise's core systems, knocking our warp drive, transporter and shields off line. This would be a simple repair procedure if we were in Spacedock, but the nearest starbase is now forty days' journey away – at warp factor six. With only impulse power available, it will takes months to arrive, on a course that skirts the Neutral Zone. And a recent increase in Romulan patrols makes that far too dangerous to attempt without shields.

Spock detects a planet four days away with indications of dilithium near two warring regions. The plan was to head down in a shuttle, obscured by a mountain range. Scotty's team would mine a crystal while Kirk, Spock, McCoy and guards would keep watch to avoid being noticed by the natives and interfering with their culture. Among the guards was Lt. Arbee, recently transferred from the USS Endeavour, on his first landing party with the USS Enterprise. Sulu takes command, with the ship monitoring Romulan activity with orders to withdraw should there be an incursion. On the ground, dilithium gas meant phasers could not be fired in the area.

After landing the shuttle Ellis in the hills, the team runs into natives almost immediately. A group of Kalans are immediately ambushed by Zhorans, leading to a fight where Arbee fires his weapon, igniting the gas, killing himself and injuring Spock. As McCoy examines Spock, three natives appear, introducing themselves at Misha, Taro and Shoji. Misha is a healer who realizes that Spock has contracted a plague and needs to be taken to their clinic for treatment.

En route, Misha explains the planetary situation. The Kalans and Zhorans were brothers until the plague came. A cure was easily converted from suja moss, a bioluminescent moss, but the plague spread so fast and the moss became so rare that war broke out. Anyone treated by the moss became immune, but everyone had lost someone from the plague. She treats Spock with moss taken from the hills, but he needs more or he will die in a few hours.

Ship's Log, Stardate 5216.8.
Lieutenant Sulu in temporary command. Crews are working to repair the warp engines and transporters, but the damage is extensive and the progress is slow. Repairs on the shields will have to wait until Mr. Scott returns from the planet. Mr. Scott's team has discovered a dilithium vein and is beginning to excavate a suitable replacement crystal. Long range sensors continue to monitor Romulan activity near the Neutral Zone. Since we have minimal weapons online, in the event of a Romulan incursion, my orders are clear: Abandon my captain and the landing party, and take the Enterprise to safety.

Scotty discovers a huge amount of the moss. Kirk asks Scotty to bring it to the hospital quickly. Meanwhile, Misha's father, General Gomi, approaches Kirk, asking for the weapon his people had seen blow up the dilithium gas. Kirk refuses, and one of Gomi's soldiers lunges for it. To prevent them from taking the weapon, Kirk sets his phaser to overload and throws it away to auto destruct harmlessly overhead. Scotty and his team arrives with handfuls of the suja moss, and Kirk says they've found enough perhaps to cure everyone on the planet, if Kalans and Zhorans work together to harvest it. Gomi was argumentative but Misha appeals to him to stop distrusting and help end the war.

Captain's Log, Supplemental.
The Kalan Healer, Misha, has successfully treated Mr. Spock's sickness. Mr. Scott and his team have returned to the Enterprise and have notified me that the transporter will be back online within the hour.

Captain's Log, Stardate 5218.1.
Mr. Scott and his team successfully extracted a replacement dilithium crystal without disturbing the suja moss. Mr. Spock is expected to make a full recovery, but slowly, which should please Dr. McCoy to no end, and keep Nurse Chapel happily occupied for a while. To be safe, we'll take a course that avoids the Neutral Zone. We should arrive at Starbase 42 for complete repairs in 23 days ... barring any further incidents.

The USS Enterprise was stranded without warp power in: 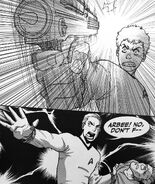 Arbee, on his first mission. 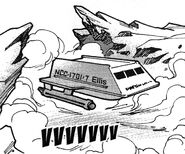 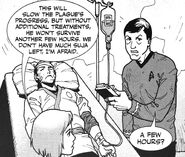 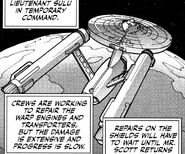