Stardate 44010.2: the twenty-fourth century. Humanity's greatest dreams have become reality. Along with dozens of other sentient races, the people of Earth have formed the United Federation of Planets—a galactic civilization that governs much of the known universe for the good of all. Over the past two centuries, mankind has tamed its basest instincts, and reached the stars...

But suppose it hadn't happened that way at all? Suppose instead humanity's darkest impulses, its most savage, animalistic desires had triumphed? Suppose the empire mankind made out in the stars was one ruled by terror, where only those willing to brutalize their own kind and their neighbors could survive?

One hundred years ago, four crewmembers of the USS Enterprise crossed the dimensional barrier and found just such an empire. A mirror image of their own universe, populated by nightmare duplicates of their shipmates. Barely able to escape with their lives, they returned thankful that the accident that brought them there could not be duplicated. Or so they thought.

But now the scientists of that empire have found a doorway into our universe. Their plan: to destroy from within, to replace one of our starships with one of theirs. Their victims: the crew of the USS Enterprise NCC-1701-D.

Here, from the author who gave us the smash New York Times bestseller Spock's World, is a dramatic Star Trek: The Next Generation adventure unlike any seen before. A story that shows us the crew of the Enterprise-D in mortal combat against the most savage enemy they have ever encountered... themselves.

The Enterprise-D crew is drawn into another dimension and learns that it's the mirror universe first visited by Kirk and three other crewmembers a century earlier. They learn the Empire has found a way to cross the dimensional barrier and intends to invade the Federation and Romulan and Klingon empires, and must find a way to thwart this attempt.

During a brief stop at one of the outer edges of the galaxy, the Enterprise brings aboard a mission specialist, a Delphine species representative named Commander Hwiii (pronounced Wheee). Hwiii studies hyperstrings, which he theorizes can be used to predict events such as a star about to go nova.

After Hwiii conducts his studies for a few days, a strange occurrence happens that the crew notices. This is followed by an intruder alert: they find a man in the computer core who should be a biologist, and who also seems to be asleep in his quarters. Picard orders a check of the records about duplicate ship's personnel, and before a briefing, the Enterprise has an encounter with a strange dark-metal-colored ship... which appears to be a duplicate of the Enterprise and has the name "ISS Ent--" along with a registry number "ICC-1701-D", on it.

At the briefing, Data reports on a century-old classified report of the original Enterprise visit to Halka and the encounter with a parallel universe with an Earth-based empire. They decide that the other Enterprise must be the cause of their transfer between universes and so they must get an away team aboard it to obtain that information. Geordi and O'Brien scheme to use a shuttlecraft to carry Geordi and Deanna over and beam them aboard covertly. Monitoring of leaking communications signals allows them to see what the other ship's interior and crew look like, so uniforms are fashioned for Geordi and Deanna to allow them to resemble their counterparts.

Once aboard, Geordi and Deanna attempt to download the needed information from the Imperial computer, but Deanna has too many passwords she uses at home to risk giving the wrong one on the Imperial ship; they summon Jean-Luc to either pull them out or come over to order the security chief of the ISS Enterprise, Counselor Deanna Troi, to release the computers.

Jean-Luc comes over, even though his counterpart has still not been seen on monitored images. The mirror Picard is tricked by Deanna long enough to be sedated by Geordi, and Jean-Luc comes out of hiding, and changes into one of the spare uniforms in the closet. Fortunately, there are no outward physical differences between the two Picards, the two La Forges and the two Trois.

Jean-Luc plays the part of the empire Picard, going to the bridge, and after surviving an assassination attempt by Wesley Crusher, hits upon the solution in Sick Bay. He programs nanites and turns them loose to attack the computer cores in a selective manner. Jean-Luc prowls his counterpart's quarters, spotting the identical library of books, a nearly-identical painting he was working on a few days before, and inquiring with the computer for historical information.

Jean-Luc discovers that Spock was executed for treason only a few years after he began effecting some changes, changes which were long since reversed. He discovers that the Empire has been growing in ever larger leaps and has run out of room to expand, since the gaps in the galaxy are so wide that even Empire ships, with their more powerful warp engines, cannot bridge in less than years. The Empire is looking for other expansion options, and someone recalled the Halkan incident.

Jean-Luc also investigates the record of Picard's command, and discovers that Picard had the Edo "god" destroyed, a continent on Ligon II destroyed to force the planet to surrender, destroyed the Ferengi homeworld population to allow settlement by the Empire, destroyed the lifeform of Velara III, and assorted other atrocities. Jean-Luc also must guard his thoughts from Troi, and withstand the affections of Picard's "captain's woman", Dr. Crusher, without raising suspicion. Most particularly, he finds that a smarmy Riker is after Picard's job, though repeatedly protesting that Picard has Riker's complete support.

When the computers start failing, Jean-Luc plays a captain enraged about his ship falling apart; Geordi, also playing his part, says the cores need to be released while they're still responding to commands; Jean-Luc orders Troi to input the codes, which she does.

Geordi then plays for time with a complex chip swapping method to restore one core, but his counterpart's assistant, Eileen Hessan, notices one of Geordi's beamouts of chips back to the Enterprise, and alerts Troi. Troi realizes Geordi is the counterpart, not the proper Empire officer, removes his subcutaneous transponder with a crude surgery by dagger, and sends him to the agony booth for interrogation. There, she learns that Picard's counterpart also is aboard, but she misinterprets Geordi's blurt-out of "Counselor" as a plea for mercy. Troi heads for the lower decks to find Picard.

Jean-Luc, meanwhile, has to keep his counterpart from awakening from slumber and setting off the alert; the two are in a struggle before Jean-Luc has the upper hand and stuns his savage counterpart with a phaser blast, only to hear a phaser blast in the corridor. Jean-Luc emerges to find that Troi or her henchman has disintegrated Picard's personal guard, Lt. Barclay. Jean-Luc's rage is genuine, and he leaves a discomfited Troi. Meanwhile, Deanna has masqueraded as Troi to get Geordi out of the agony booth. The three meet at the top of one computer core, which under Hessan's leadership are rapidly being restored. Geordi downloads the information needed and gets 98 percent when the security goes back up, locking him out. They are beamed back to the shuttlecraft just as Picard and security arrive, and are as promptly beamed from the shuttlecraft to the Enterprise in time as the Imperial ship's phasers destroy the shuttlecraft, which had been cloaked by Geordi's best imitation of a Romulan cloaking device.

Geordi now must implement the information they stole. Fortunately, Hwiii has been directing the construction of an apparatus that uses some of Hwiii's knowledge, and now Geordi has brought the information that allows them to replicate all the necessary remaining parts and program it.

The Enterprise is warping away as Hwiii and Geordi lead the final assembly, but soon the Imperial Enterprise has its engines up and running again, and it sets out in pursuit. The first test of the apparatus fails, while Jean-Luc has a conversation instigated when Picard hails the Enterprise from the Imperial ship. When the second test succeeds, the Enterprise then prepares to cross over back to its own universe, and succeeds. Seconds later, the Imperial ship arrives as well.

Information is soon disseminated throughout Starfleet on how to equip each base and ship throughout around the Federation with the equipment to catapult Imperial ships back to their universe.

This was the first ever Star Trek story to portray the mirror universe in the 24th century. Many details presented here are contradictory to the canon version of the 24th century mirror universe that was later shown in DS9 episodes. Many other non-canon mirror universe outings disregard "Dark Mirror" in favor of the canon interpretation. These include Susan Wright's "Dark Passions" series, William Shatner's so-called "Mirror Universe Trilogy" and the "Star Trek: Mirror Universe" series beginning with the anthology "Glass Empires". However, if an infinite number of universes are continually created, it is possible that in Dark Mirror, the book simply shows an alternate mirror universe where the Terran Empire never fell. Also, with the release of the "Mirror Broken" miniseries of comics in 2017, there is now one more take on what a still existing Terran Empire might look like in the 24th century. 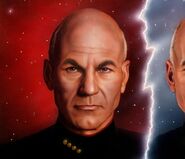 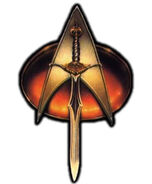 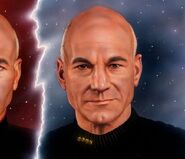