1483.4
Steel sentries challenge a returning space traveler and his Enterprise guests!—"Dark Traveler" was the 13th issue of the Gold Key Comics series of Star Trek: The Original Series comics.

What is the aftermath of utopia? What happens to heaven when it descends into the darkest pits of hell? These are the questions Captain James T. Kirk and the crew of the starship, Enterprise, must answer when they pick up an intergalactic hitch-hiker — and are forced to take him home!

In the ruins of an advanced city, Kirk, Spock and McCoy are being fired upon by a robot in a flying sled, on which their phasers have no effect…

Captain's log, star date 14:83.4—We are passing the uninhabited planet Zeron II on our way through the Sigma star-system—nothing unusual to report…

Spock detects an energy discharge from the planet's surface. A man wearing a dark, hooded robe and carrying a long golden staff appears in Kirk's captain's chair. He claims to be a traveler who wishes for the Enterprise to take him home. He has placed the helm under his own control; when Scotty objects to this, the man stuns him with a beam from his staff. As Kirk threatens the man with a phaser, the ship accelerates to warp eight. Spock realizes that the traveler has altered the ship's atomic structure to enable it to withstand the speed. McCoy arrives on the bridge to be told by Spock that their guest is an "inter-galactic nomad". The man explains that his home planet is a paradise where robots do all the work, allowing the people unlimited leisure and causing them to stagnate. The Nomad left in search of knowledge and has traveled the universe, but is now weary. He would not have commandeered the Enterprise had he not lacked the power to journey home on his own.

The ship arrives at Nomad's planet and establishes standard orbit. Nomad has enabled the computers to guide the ship home. Spock and McCoy, however, express the desire to visit the planet. Nomad transports himself, Kirk, Spock and McCoy to the surface, where, to Nomad's shock, they find themselves in a ruined city. A man approaches, shouting at them to run and pursued by a robot flying in a "porto-sled". The robot fires at the man and mortally wounds him. Nomad pulls the man into cover, but the robot has seen the Enterprise officers. Kirk orders phasers set at destruct level, but they have no effect...

Captain's log, star date – Unknown – We have been mysteriously boarded by a black-garbed alien we've named Nomad – who has commandeered the Enterprise to return him to the utopian planet he calls home! Upon reaching the planet, First Officer Spock, Doctor Leonard McCoy and I beamed down with Nomad – only to discover that the gleaming crystal towers that once stood here have been reduced to ashes...

Nomad destroys the robot and its porto-sled with his golden staff. The wounded man is still alive and recognizes Nomad, telling him as he dies that he has returned too late. Niklon, Nomad's brother, who ran the robot production plants, took control of the robots and used them to conquer the planet, destroying this city as an example. Nomad vows to stop his brother, and Spock suggests that they use the Enterprise's power to help him. However, Kirk cannot contact the ship, and Nomad realizes Niklon must have control of the Enterprise.

Nomad, Kirk, Spock and McCoy travel to the City of the Thousand Lights aboard a metal craft like a flying carpet. They hide the vehicle and approach the government seat, which is guarded by robots. Nomad uses his staff on the robots, but it needs time to recharge, and the four men are captured and led inside. Niklon, a diminutive man, is seated inside a transparent control dome. He has conquered the planet in revenge for being sent to the robot works so that others would not be bothered by his appearance. The four prisoners are led down to the cells, where other captives recognize Nomad. McCoy tricks a robot into thinking Kirk is ill; when it opens the cell it is short-circuited by the light fixture Spock attached to the door.

The other prisoners, also freed, wish to attack Niklon. Spock devises a strategy: he disguises himself in the robot's casing and escorts Kirk, McCoy and Nomad to Niklon's chamber, which is attacked moments later by the other prisoners. Niklon's control dome rises from the floor, revealing that it is the top of a giant robot. Spock takes Nomad's staff from the robot which had confiscated it, and Nomad uses it to melt Niklon's robot, in the process destroying the controls for all the robots on the planet. The Enterprise is freed, Niklon is turned over to the people for justice, and Nomad remains on his planet to help rebuild it. Back on the Enterprise, McCoy compliments Spock on his success at playing a robot.

The City of the Thousand Lights. 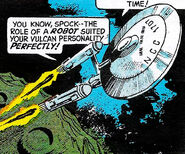 USS Enterprise at the Traveler's homeworld. 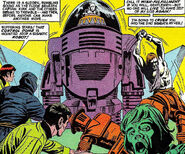 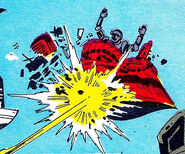 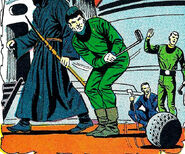