For three full decades, on television and in film, actor William Shatner has portrayed one of the legendary heroes of science fiction: James Tiberius Kirk, captain of the Starship Enterprise. Although Kirk was believed to have perished at the conclusion of Star Trek Generations, his amazing literary resurrection led to an acclaimed trilogy of national bestsellers, The Ashes of Eden, The Return, and Avenger.

Now William Shatner again brings his unique blend of talents as actor, writer, director, and producer to continue the thrilling new trilogy that began in Spectre, as Jim Kirk must confront the most dangerous enemy of his career - himself.

The Mirror Universe is a dark and twisted reflection of our own, where humans and Vulcans live as slaves to a brutal alliance of Klingons and Cardassians -- an alliance long believed to be the creation of one man: the feared and hated Emperor Tiberius, the Mirror Universe counterpart of James T. Kirk. But just as Kirk survived his own age to live in the era of a new generation of heroes, so Tiberius now returns to fulfill his mad dreams of total domination - not just of his universe, but of Kirk's as well.

From the nightmarish landscape of the Mirror Universe Earth to the joys of impending parenthood and marriage to the woman he loves, the incomparable Teilani of Chal, Kirk is propelled into his most personal and dangerous mission yet as he fights to uncover the secret of Tiberius' return, and learn the terrible truth behind the madman's nightmarish plans for the Federation.

With Spock, McCoy, and Scotty at his side, and reteamed with Jean-Luc Picard and the crew of the U.S.S. Enterprise-E, Kirk discovers an unexpected enemy within Starfleet itself -- a mysterious group still guarding frightening secrets from Kirk's own time. And as Kirk fights to expose those secrets, his epic search becomes a deadly obsession that threatens all he holds dear, drawing him inexorably to a stunning conclusion that will forever change his life and his understanding of the universe.

With the fate of two universes hanging in the balance, Star Trek: Dark Victory is Star Trek storytelling at its best. 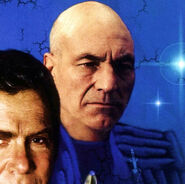 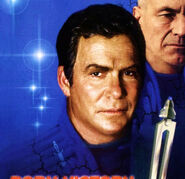 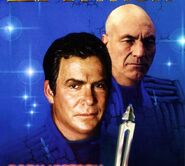