This character is a member of the Gold-Gilman family.

David Gold was a Human man in Starfleet in the 24th century.

Gold attended Starfleet Academy, and during his early days there, he dated a student from Stamford University named Patrice Bennett. The two drifted apart, though, as they realized they wanted different things, but remained on positive terms. (SCE eBook: The Art of the Deal)

Gold ran on the Academy track team, and in a 2321 competition against Columbia University, he met a Columbia student named Rachel Gilman. After Columbia won the meet, Gold and Gilman began dating, and married a year later, in 2322. During his fourth year, Gold ran in the Academy Marathon, but was beaten by a first-year cadet named Jean-Luc Picard. (SCE eBook: The Belly of the Beast)

The following year, in 2324, Gold and Gilman moved into a house in the Bronx, in New York City, which they continued to call home for over fifty years. (SCE eBook: Breakdowns)

In 2328, Lieutenant Gold was part of an assault team from the Gettysburg against a secret Cardassian spy base on the moon of Delavi III. The mission was led by Lieutenant Commander Dilat th'Sena, and included Lt. Augustus Bradford, Lt. Mairin ni Bhroanin, Ensign Jolev, and Ensign Rha-Teramaet. The team was eventually successful in securing the base, though th'Sena was killed in action. Gold and the other four team members remained fast friends for many years to follow. (CoE eBook: Turn the Page)

At some later point, Gold reached the rank of Commander, and was assigned as first officer of the USS Boudicca, under Captain Alynna Nechayev. (SCE eBook: Progress)

It is unclear when this assignment took place, given contradictory data in Nechayev's career timeline. As it is revealed in a dream Gold has while injured, it may be open to interpretation.

By late 2348 or early 2349, Commander Gold was assigned to the USS Schiaparelli. Around that time, while visiting Earth, he was asked by Picard to check on Lieutenant Jack Crusher, on paternity leave following the birth of his son Wesley, when the junior officer failed to return to duty on schedule. Gold offered to help Crusher return to his vessel, the USS Stargazer, and to speak to Picard on his behalf. (TNG novel: Losing the Peace)

In 2355, Gold was one of many friends who sent Picard messages of condolence after the loss of the Stargazer at Maxia Zeta. (TLE novel: The Buried Age)

Circa 2361, Gold was temporarily possessed by an alien intelligence. (SCE eBook: Identity Crisis)

Gold was eventually given command of the Schiaparelli, and served as captain of that vessel until it was decommissioned. He then served in an administrative post on Earth for six months, after which he returned to space duty. (SCE eBook: War Stories, Book 2)

Captain Gold was later given command of the USS Progress, a post which he held until 2369. Near the end of that assignment, he visited planet Drema IV. He was on the surface during a mining accident, and spent several hours underground, helping other trapped Dremans, before being rescued. (SCE eBook: Progress)

The exact dates of these two commands are not known, nor is it known whether there were any other assignments in between.

The Progress was reassigned to supply runs within the Sol system in late 2369, at which time Gold relinquished command. (SCE eBook: Progress)

Though it may be assumed Gold took command of the da Vinci at the same time it was assigned to the S.C.E. in 2370 (SCE eBook: Security), this has not been stated explicitly.

In the year 2373, the timeline became fractured, with one permutation being referred to as the First Splinter timeline. Captain Gold's command of the da Vinci took place in this reality. (ST - Coda novel: Oblivion's Gate)

In mid-2376, the da Vinci was caught and nearly destroyed in the atmosphere of a gas giant planet, Galvan VI. Gold was nearly killed by collapsing beam on his bridge, but was saved when Lieutenant David McAllan pushed him out of the way, sacrificing his own life. Gold lost his left hand in the accident, which was later replaced with a biosynthetic prosthesis. After a brief period of recuperation in New York, he returned to the da Vinci. (SCE eBooks: Wildfire, Book 1, Wildfire, Book 2, Breakdowns, Aftermath)

Gold resigned from Starfleet in 2380, following the Borg attack on the Sol system. He returned to Earth to become a consultant on planetary defenses. (ST novel: A Singular Destiny)

In the year 2387, the entire Sol system was destroyed as part of the Devidians' temporal apocalypse, wiping out Starfleet Command and the Federation government on Earth. (ST - Coda novel: Oblivion's Gate)

Gold had five siblings, including a brother, Adam. He and Gilman had six children together, nineteen grandchildren, and (as of 2377) sixteen great-grandchildren. (SCE eBooks: Wildfire, Book 2, Breakdowns)

In an alternate universe accessed by an interdimensional Androssi device, David Gold was widowed in 2356 when Rachel Gilman was killed in a shuttle accident, turning him away from his faith. As of 2376, he was captain of the USS Gettysburg, searching for the yet-undiscovered Celestial Temple at the behest of Kira Nerys. Learning through his contact with the "real" universe of the Bajoran wormhole's location in the Denorios Belt, Gold sacrificed his life to improve the future for Bajor and the Federation. (SCE eBook: Lost Time) 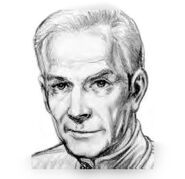 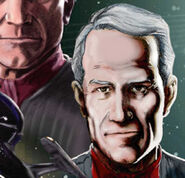 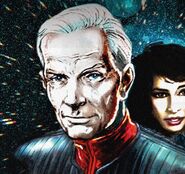 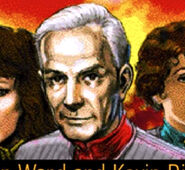 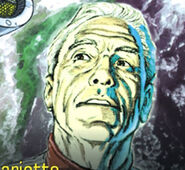