48273.5
Dax discovers a comet heading for the wormhole, which a group of Bajorans believe will bring about an apocalypse.

Two Bajoran men enter a cavern on Bajor, and absail deep. They notice writing on a rock and they hear people chanting nearby. Investigating, they find a large group of people, whose leader is extolling someone or something called the Messenger. The two men are discovered and brought before the leader of the group. The group are Bajorans, but a hidden cult known as the Guardians. The leader predicts an imminent apocalypse in which the main Bajoran populace will die, allowing the Guardians to leave their hidden lives underground and populate the surface.

On Deep Space 9, there have been months of building tensions, of Bajorans leaving the station and outbreaks of violence, all driven by fears of an apocalypse. Sisko breaks up a fight at Quark's and later asks Kira for her thoughts on what is happening. Kira tells Sisko of the Battle of the Gods, a two thousand year cycle of destruction, in which many Bajorans perish and may be imminent again.

Dax meanwhile has been tracking a comet that changes trajectory and is headed for the wormhole. If the comet, enters or passes near the wormhole, it will emit a massive burst of radiation that could affect Bajor. Kira wonders if the comet is the Messenger. Chief O'Brien wants to destroy the comet, which Sisko acknowledges is the most obvious solution. Dax warns that doing so could affect other civilizations and violate the Prime Directive. Sisko contacts Starfleet to appraise them of the situation.

On Bajor, the Guardians fear that Starfleet will destroy the Messenger, and vow to take action. They travel to DS9 to meet with Sisko. Their leader notes that he is aware that the Messenger will cause destruction but voices his opinion that there can no rebirth without death. Just then, two massive explosions rock the station. 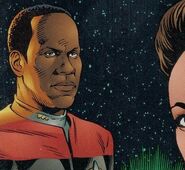 The Bajoran Council of Guardians and their followers prepare for disaster.