48278.3
With the Messenger comet on course for the wormhole, the Bajoran religious extremists begin attacks around the station; Jadzia leads an attempt to divert the comet.

After the explosions on Deep Space 9, Chief O'Brien is trying to restore power to the station. The leader of the Bajoran Guardians warns Sisko to not interfere with the Messenger comet. Sisko has Kira take the Guardians to a security suite for the moment. Meanwhile, other Guardians are running amok on the station, but are held back by Odo's deputies.

Starfleet warn Sisko that the Prime Directive applies. With the comet less than a day away, Dax has been able to analyze the comet: its interior is made of tritium. If the comet reaches and interacts with the wormhole, the radiation would destroy the station.

Before Sisko can decide on the next course of action, the Guardians reach Ops, at the same time freeing their leaders. Odo stops the soldiers in Ops, while Sisko confronts their leaders on the Promenade. Sisko excoriates them for remaining separate from Bajoran society waiting for Armageddon, while their people built a magnificent civilization and developed space travel.

Dax leads a mission to divert the comet away from the wormhole, but she has worries it could destroy other civilizations. The Guardians are sent to Bajor to stand trial for their crimes. 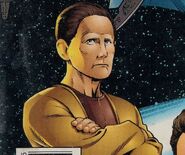 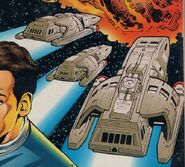