Day of the Inquisitors

Day of the Inquisitors

4325.2
Missing in action — on a dark age planet! — "Day of the Inquisitors" was a Star Trek comic book story published by Gold Key Comics in 1972, the 16th issue of their TOS series. It was the last of eight stories written by Len Wein and the 14th drawn by Alberto Giolitti.

In this story, the crew of the crashed Galileo shuttlecraft are obliged to interact with a medieval society.

Shipwrecked on an alien planet, Captain James T. Kirk and his companions find themselves prisoners of a strange cult of power-mad fanatics — with little hope of the starship Enterprise coming to their rescue...

Hanging from chains in a medieval dungeon, Spock is threatened with further torture unless he divulges information Kirk desperately asks him not to reveal...

Aboard the Galileo, the diplomatic party discuss their moderately successful first-contact mission. The shuttlecraft hits a meteor storm and crashes in a forest on a nearby planet. Its occupants are unhurt, but the shuttle is beyond repair and its communications system is damaged. Kirk and the others follow a road to a nearby city in search of replacement parts for the radio. Kirk and Spock knock out the guards at the gate and the group enters the city. They rescue an older man who is being forcibly escorted by three men in black robes. When his captors flee, the old man, Corben, tells them the black-robed men are the Inquisitors, who are oppressing the people.

Captain's log, star date 43:25.6 – (Lt. Cmdr. Scott reporting) – The shuttlecraft carrying the captain and the others is long overdue – we are preparing to initiate emergency procedures...

Uhura receives a message from Star Fleet Command ordering the Enterprise to respond to a planetary disaster in the Sigma Quadrant. Scotty risks court-martial by continuing to search for Kirk. Now in "borrowed" native clothing, Kirk's party is led by Corben toward the rebel camp in the mountains. They see the Inquisitors carting the radio and the other equipment from the shuttle toward the castle. Corben, Kirk and McCoy proceed toward the rebel camp, while Spock, Chekov and Claire head for the castle to recover the equipment.

Captain's log, star date 43:25.7 – Our shuttlecraft has crashed on a planet in the throes of an inquisition! While searching for replacement components, we've watched our equipment being carried to the castle of those who rule this world – and we know that attempting to regain that equipment will most likely result in our deaths...

With the help of the Vulcan nerve pinch, Spock, Chekov and Claire disguise themselves as Inquisitors and enter the castle. The Enterprise is checking the flight paths the shuttle might have taken. Star Fleet insists that they give up the search, leading Scotty to reflect that "they've just ordered me to let my best friends – die!" In the castle, the equipment is being examined by Inquisitors in a guarded room. Chekov and Claire attack the guards, causing the Inquisitors to leave the room to investigate. Spock enters the room to retrieve the radio and other tools, but is struck from behind and knocked out. The three are brought before the Grand Inquisitor, who orders them taken to the interrogation chambers to reveal the workings of their machines.

At the rebel camp, Kirk offers Karad, the rebels' leader, the chance to deal a blow to the Inquisitors' power by attacking the castle and helping recover the equipment. Karad agrees, and they set out for the castle. In the castle dungeon, Spock is resisting torture with his Vulcan tolerance of pain. When the Grand Inquisitor threatens to torture Claire instead, Spock agrees to tell him everything. With the situation in Quadrant Sigma worsening, Star Fleet again demands that Scotty abandon the search; knowing that Kirk would want him to leave, he decides to search for thirty more minutes.

Kirk and McCoy's phasers have enough power left to break through the castle doors. The rebels fight the guards while Kirk and McCoy make their way to the room where Spock, Chekov and Claire are being held. Spock has repaired the radio in order to demonstrate its use to the Inquisitors. He contacts Scotty, who beams the five officers away, leaving Karad to tell the captured Grand Inquisitor that they were men, not demons.

Captain's log, star date 43:26.3 – We are proceeding at warp eight to the Sigma Quadrant to answer the distress call received from that area...

Spock has recovered from his whipping. He expresses the hope that the planet's step out of the Dark Ages was a permanent one. 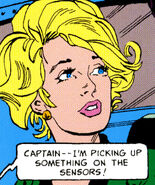 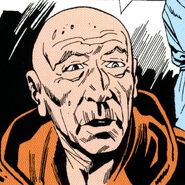 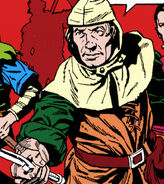 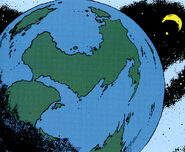 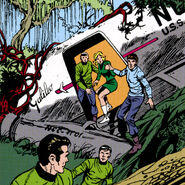 Wreck of the Galileo 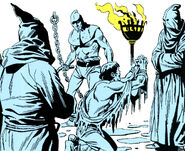 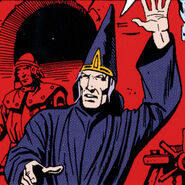