8217.2
Deadly Reflection! is a Star Trek: The Original Series comic published by DC Comics in 1985. The comic was written by Mike W. Barr, with art by Tom Sutton and Ricardo Villagran. It is the eleventh comic in DC's first TOS comic series, and the third part of the New Frontiers story-arc. In the issue the mirror-Spock takes the Bird-of-Prey to Vulcan to study his primary universe counterpart, while on the Excelsior the rest of the primary universe crew manage to trick their mirror counterparts to gain control of the ISS Enterprise. 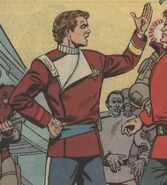 The Bird-of-Prey lands on Vulcan.