8906.3
The doomsday bug! – "Death Ship!" was the 34th issue of DC Comics' 1984 series of Star Trek comics. The issue was the first part of three in The Doomsday Bug! story arc, as written by Len Wein. The art was penciled by Tom Sutton and inked by Ricardo Villagran, with Robert Greenberger credited as editor.

Captain's log, stardate 8906.3
At transwarp speed, the Excelsior is responding to a priority one distress call we've suddenly received from the science vessel USS Surak — the Surak, currently commanded by the ever-efficient Captain Spock — Spock, my closest friend!

After receiving the distress signal, the situation looks grim. One by one, Rear Admiral Kirk's senior staff make their reports. An automated communications beam in Spock's voice warns off any attempt to stop Surak. The Surak is hurtling towards a star, with full deflector shields up, leaving the Excelsior crew little recourse to make a rescue attempt

Captain's log, supplemental
I have convened an emergency strategy session, in desperate search of solutions.

Saavik suggests that a cross-circuit overload could be used to interfere with the Surak shields giving the transporter only a moment to operate for the boarding party, at extreme risk. Admiral Kirk gives the go ahead, and a party in EV suits beams across as Saavik's manipulations reduce a control console to a shower of sparks.

Captain's log, stardate 8906.5
Despite all our shielding, we can feel the heat of the approaching sun… Though our boarding party has beamed across safely, less than three standard minutes remain before the Surak crosses the point of no return — and finds itself consumed!

Captain's log, supplemental
Bucking against it's own momentum, the Surak has suddenly slammed to a halt — so swiftly, so unexpectedly, that the Excelsior has momentarily overshot it.

Captain's log, stardate 8906.7
At Doctor Leonard McCoy's suggestion, I have beamed aboard the Surak to join the investigation…

The Excelsior boarding party begins to examine the Surak logs.

Captain's log, stardate 8905.6
At all possible speed, the Surak responding to an unidentified distress beacon…

Captain's log, supplemental
Despite my first officer's protests, I have decided to lead the boarding party myself — possibly a rash decision, an old medical acquaintance of mine might point out. But nonetheless a decision I feel both necessary and quite logical…

Captain's log, stardate 8905.9
We have transferred the terrified Andorian aboard the Surak — where he is proving to be as great a mystery as the death ship upon which we found him…

Captain's log, supplemental
A regrettable accident has occurred. At Doctor Chu-sa's suggestion, we were preparing to beam aboard several of the freighter's deceased in hopes of discovering the cause of their untimely deaths — when, without warning, perhaps due to her damaged engines, the freighter abruptly exploded — the ship and its cargo instantly reduced to so much cosmic dust.

Captain's log, stardate 8906.2
With the derelict freighter destroyed, the Surak has returned to its original course…

Captain's log, stardate 8907.1
In a familiar shimmer of scintillating energy, we fade from the heart of the Surak — even as the once proud vessel continues its irreversible journey to oblivion — racing straight towards the fiery orb looming ever larger before it — until it is finally caught in the huge sun's gravitational field — and is swiftly consumed like a moth by a flame! On ancient Earth, the Vikings sent their noblest warriors to a fiery grave… for the valiant crew of the Surak, fallen in the line of duty, could we do any less?

Captain's log, stardate 8907.4
Locked in on the shuttlecraft's beacon, the Excelsior has initiated hot pursuit through Romulan territory — until a sudden, not wholly unexpected, barrage of disruptor blasts across our bow — brings us screaming to a halt — to find ourselves in trouble up to our eyebrows — surrounded by Romulan Z-1 (Nova) class XIII battleships! 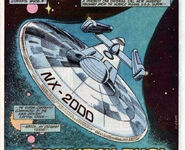