Death of a Star

Death of a Star

3333.3
The last gasp of a dying star! — "Death of a Star" was a Star Trek: The Original Series comic book story published by Gold Key Comics in 1975. It was the 30th issue of their TOS series of comics, the first of two stories written by Allan Moniz and the 27th drawn by Alberto Giolitti. In this story, the USS Enterprise expected to watch a star go nova, but instead discovered a mysterious old woman on the star’s third planet.

Trapped on a veritable keg of cosmic dynamite, Captain Kirk and the Star Trek crew become the unwilling captive audience to the most shattering spectacle in all the galaxy: a star going nova! But the natural cataclysm takes on tragic overtones when a mysterious old woman's life is mystically linked to… a strange cosmic force!

Captain's log, star date 33:33.3. Our mission is to study and record, from a safe distance, the final death throe of the star Isis. According to our calculations, this gem of space has only 48 hours before it explodes, destroying everything for billions upon billions of cubic miles! Fortunately, its star system is uninhabited!

Hikaru Sulu suddenly picked up lifeform readings on Isis III, as if an entire planet's population were in one spot. James T. Kirk beamed down to investigate along with Nyota Uhura, Christine Chapel and Spock. They discovered an old woman awaiting them inside a Mayan-style pyramid temple. Kirk offered to save her from the impending nova, but she identified herself as Isis, god of the sun. Thinking she was abandoned or insane, the landing party set out to find the missing planet's inhabitants, but the jungle path they'd followed had filled in, their phasers were drained, and solar flares cut off communications with the ship, leaving them stranded near the temple.

Captain's log, supplemental: While the Enterprise orbits helplessly overhead, due to interference from the near-nova sun, we are marked for doom! Our desperate search for Isis III's mysterious inhabitants has only led us to a strange old woman! But now I have a more immediate concern than saving the lives of the inhabitants — namely, saving the lives of the crew and myself!

Kirk and Spock found a hidden entrance under the temple, eventually locating record tapes revealing that the Isisian civilization became extinct 25 million years ago. Meanwhile, Uhura and Chapel spent time with Isis, gaining an empathy for the woman's dignity and right to die. When Spock asked her to explain some of her statements, Isis replied that Spock's logic was a cage that should be opened. She began to mind meld with Spock, but at that moment, she began glowing. She immediately sent the landing party back to the Enterprise, and then the star exploded. The ship buffeted, guided by unseen forces through the eye of the storm, and survived the blast.

Based on what he saw during his mind meld, Spock said that the Isis entity appeared to have been a human personification of the living star, created so it could talk to them before it died. 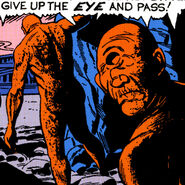 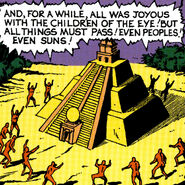 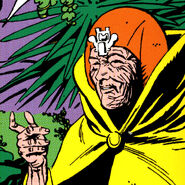 Isis as an old woman.

Isis as an Eye. 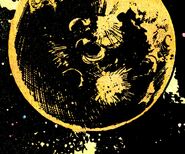 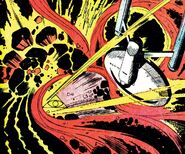