The Next Generation
Starfleet Academy No. 14

Before he was an officer aboard the U.S.S. Enterprise...

Barely three months into his program at Starfleet Academy, Cadet Data is sent to the planet Arunu as part of a class research team investigating ancient ruins. The android is fascinated by the dead planet and its effect on his fellow cadets. All the newcomers -- except Data and the unemotional, pragmatic Dyrondites -- are experiencing the jitters as they approach the artifacts of a culture based purely on emotion. There is a lesson here for each of them. But it is Data who will be put to the test....

Suddenly the communications system breaks down and they're trapped in Arunu. It's sabotage! Someone has discovered the ultimate weapon and plans to leave no witnesses behind. Data must use his relentless logic to infiltrate the enemy and save his friends before it's too late!

Data is thrown a surprise birthday party by his roommate Zhu Lniuhta'bihd, marking the anniversary of his discovery on Omicron Theta, and told that deception can be a good thing sometimes.

The cadets are told to accompany an archeological expedition as part of their xenoethnography class. Data and Zhu are assigned to the dig on Arunu, the home of an extinct civilization, led by Professor Jeffrey Spinaker, along with three other cadets: team leader Ejay Fantico, Lukas Whitlock and T'Pira. The dig has uncovered a number of tsidi, receptacles for emotions. They are being assisted by the Dyrondites, a race without emotion who have previously had a cold relationship with the Federation.

Data finds the Dyrondites reject his offers for help but manages to improve one of their scanning devices, picking up a large quantity of tsidi. He and the other cadets investigate and find they have been stockpiled by the Dyrondites, who are planning to smuggle them off planet. Discovering the cadets, they force them down a pit and then collapse it on them in an attempt to kill them, but Data is able to find a way out.

The group reach Spinaker and discover that the Dyrondites aim to utilize the destructive power when a tsidi is breached, triggering them in major population centres in an attack on the Federation. Data is convinced to approach the Dyrondites as an ally and use an explosive to disable their ship. However, instead of their shuttle they beam him up to their ship in orbit and imprison him. Data gets through the conduits and plants the explosive. More by luck than judgement, it sets off a cascade that will destroy the ship. Data manages to trigger the Drydonites' transporter and beams down to the surface, where the Drydonites are taken into custody by his fellow cadets and the archaeologists. 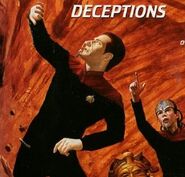