ISBN 1451606915
Declassified is sixth book in the Star Trek: Vanguard series, but the first anthology, featuring four novellas, one from each of the series' usual authors, plus the first story from former series editor, Marco Palmieri. The four stories take place throughout the run of the series, beginning prior to Harbinger and Distant Early Warning, and ending after Precipice.

From the back cover
The Taurus Reach: the source of a secret that has driven the great powers of the 23rd Century to risk everything in the race to control it. Now four new adventures—previously untold tales of the past and present, with hints of what it is yet to come—begin the next great phase in the Vanguard saga.

Witness the dawn of Starbase 47, as Ambassador Jetanien faces choices that will shape the future of Operation Vanguard; follow journalist Tim Pennington as he reaches a crossroads in his search for the truth; see how the crises on two colonies transform the lives of Diego Reyes and Rana Desai; and travel with Cervantes Quinn to a deadly confrontation that will change everything—all in one unforgettable Star Trek collection.

Commodore Reyes gripes about the station’s numerous technical issues while awaiting the arrival of his XO. Meeting Rena Desai, he finds himself instantly attracted to the JAG officer, though the two repeatedly butt heads over their differing policies towards the station’s civilian population and the Omari-Ekon. Still, he asks Desai to join him for dinner. The date goes well and quickly develops into a relationship.

The U.S.S. Sagittarius conducts a survey of Traelus II, a resource rich planet near Tholian space, and discovers a sample of the Taurus Meta Genome. While investigating more closely, a Klingon warship arrives and engages the Sagittarius. Both ships are damaged, and the scoutship hides on the planet’s surface while the Klingons call for reinforcements. The Starfleet crew finally escapes by carving a hunk of sensor-dispersing ore from the planet and hauling it into orbit, effectively disguising their ship as an orbiting asteroid.

Anna Sandesjo confronts another undercover Klingon operative for his sloppiness before vaporizing him. Soon after, at a meeting with Reyes, Jetanien, and T’Prynn, she and the Vulcan find themselves attracted to each other. Reyes suspects that there is a spy onboard, and though both T’Prynn and Jetanien later discover Sandesjo’s true identity, neither shares their findings with Reyes. T’Prynn visits Sandesjo in her quarters and, after suffering another mental attack by Sten, the two women sleep together. During the encounter, Sten forces T’Prynn to mind meld with Sandesjo, confirming her suspicions of Anna’s true nature, but also inadvertently revealing her mental instability. Sharing each other’s secrets, the two women grow closer.

2266, one week after the conclusion of Reap the Whirlwind

Tim Pennington finds himself perona non grata after publishing stories that cost Reyes his command and his freedom, hindering his efforts to investigate and report more recent news. The only personable contact he has is with Amity Price, a young woman striving to be a reporter who approaches Pennington for some tips and assistance. Amity takes a job aboard the Omari-Ekon, surreptitiously investigating a lead about Starfleet officers involved in black market deals with the Orion Syndicate. However, they are quickly discovered; Amity is “disappeared” and Pennington is beaten and escorted off the Orion ship, narrowly avoiding suffering Amity’s fate due to his high profile aboard the station. Feeling responsible for her demise, Pennington takes little consolation that his investigation helped station security to plug a breach and uncover evidence of Orion efforts to intercept classified Starfleet intelligence.

January 2268, just after the conclusion of Precipice; flashbacks to 2259

As the station crew repairs the damage caused by the captured Shedai Wanderer, Desai and Fisher comes to terms with the fact that Diego Reyes is still alive, albeit branded a fugitive and a traitor. While Rana reasons that her relationship with Reyes cannot continue, Fisher reflects on days gone by, when he, Reyes, and Hallie Gannon all served together aboard the USS Dauntless nine years earlier.

2259: The Dauntless responds to a distress call from an Arkenite mining colony on asteroid Azha 7a, finding the IKS Chech’Iw in orbit. Reyes’ initial reaction is to attack, but his new XO and “Klingon specialist”, Gannon, suggests prudence and the Klingons reveal that they are actually rendering aid to the colonists after an industrial accident. General Gorkon, whom the Dauntless crew has engaged before, offered his assistance on the condition that the Arkenites swear loyalty to the Empire, and Arkenite honor demands that they repay that debts despite being forcibly coerced. While escorting the Dauntless out of the system, the Chech’Iw is disabled by a shipboard explosion and the Starfleet crew renders aid of its own. It is discovered that the Klingons were experimenting with theragen, a nerve agent no longer in use by the Klingons. The Chech’Iw’s crew has been working to keep Kintazh, son of Gorkon, alive following an accident that exposed Kintazh to theragen and also cost him his honor. Gorkon likely engineered the disaster on the Arkenite colony so that he could gain access to its advanced (by Klingon standards) medical facilities under the cover of humanitarian aid. Reyes agrees to keep Gorkon’s true intentions secret in exchange for his releasing the Arkenites from their debt. After Kintazh is treated, he attacks Reyes and is killed by his own father; Kintazh’s honor is restored by dying in battle with an enemy, Gorkon’s secrets are safe, and Reyes life is spared to prevent war between the Federation and the Empire.

2268: Starfleet Command decides that its resources are spread too thinly through the Taurus Reach and orders several Federation colonies to relocate to within Starfleet’s new patrol routes. Commander Aole Miller, Starfleet liaison to the local colonies, is killed while trying to convince the New Anglesey colonists to evacuate. Admiral Nogura sends Desai and Fisher to investigate the death and to finish Miller’s mission. The colonists are adversarial and refuse to leave despite the risks, though their claims of chafing under oppressive Federation rule are revealed to be a cover for their true intentions—their planet, Kadru, is home to a nearly sapient life-form whose blood has miraculous medicinal uses. They fear that the creatures will be hunted to extinction if that secret becomes common knowledge. Aole Miller made the same discovery, but accidentally drowned in the process.

Desai helps the colonists to draft a legal petition to make Kadru a protected habitat, forcing Starfleet to continue supporting the distant colony and angering Nogura. She also applies for a transfer to Earth, which Nogura quickly grants. She confesses to Fisher that she has been unable to help Reyes during his many recent crises, and that she doesn’t want to simply watch his story unfold while being powerless to help him.

February 2268 two months after the conclusion of Precipice; just before “The Tholian Web”

Ganz learns that Quinn killed Zett Nilric and has taken his ship, and sends a Nausicaan assassin after the human. Ganz’s boss, Neera, warns him about making things personal, and though she refuses to allow him to kill Reyes, still a “guest” on the Omari-Ekon, she lets him pursue Quinn at his own risk.

SI operatives Lt Commander Bridget McLellan and Cervantes Quinn are sent to steal an artifact containing a Shedai from the Klingon base on Zeta Aurigae IV. With limited resources and outdated intelligence, they deem the theft to be impossible and simply release the creature, narrowly escaping its wrath as it obliterates the base. Their next mission is to retrieve data from an Orion ship—currently in Gorn custody—pertaining to the Jinoteur pattern. En route to the Gorn border world Seudath, Quinn urges Bridy Mac, who is his lover as well as his partner, to consider retiring from the spy business and settling down to enjoy their lives together. She agrees to consider it after their current mission.

As Bridy Mac and Quinn plot to slip aboard their target ship, it explodes, and they pursue a Klingon agent fleeing the scene. Their cover is blown when the Nausicaan arrives and tries to kill Quinn, and the pair split up to deal with their respective problems. Quinn incapacitates the mercenary and tells him to deliver a message to Ganz that Zett was killed while pursuing a personal vendetta, not on business for the Syndicate. Ganz later decides to let Quinn go. Bridy Mac intercepts the Klingon agent and his handler and escapes with their data card, though she is unaware that they have already copied the intel. Quinn decodes the information and discovers the source of the Jinoteur pattern, and the operatives are ordered to investigate further. Captain Khatami also reminds Bridy Mac that the agents are considered expendable, and provides her with a 5 megaton bomb to prevent any precious cargo from falling into Klingon hands. Bridy and Quinn find an artificial wormhole that leads to a pocket universe. Their journey through the wormhole is rough, and they crash-land on the sole planet of the realm’s only star—the remains of the Jinoteur system. They track the waveform though an icy wilderness to a cave, and though Bridy Mac breaks her leg and loses her tricorder, they push on and discover the Shedai Apostate. He has recognized that the Federation must face and defeat the rest of the Shedai and offers them the key to an ancient hidden weapon of Tkon design created for just that purpose. He cautions the operatives that he used the last of his energy to create this universe, which is collapsing, as he fades from existence.

Bridy sends Quinn back to the ship for a tricorder, to record the Apostate’s detailed holographic message, and a medkit. As he reaches the ship, a Klingon fleet arrives and lands between him and the cave. Though Quinn is ready to engage several hundred Klingons single-handedly, Bridy orders him away, tells him that she loves him, and detonates the bomb. The entire Klingon force, and Bridy Mac, are killed, and Quinn’s ship is torn apart and buried in an avalanche. The Endeavour arrives hours later and rescues Quinn just before the pocket universe collapses, though he finds he has nothing left to live for. 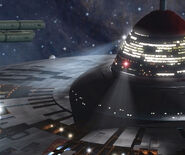