For other uses, see Defiant.

2 type-10 shuttlecraft; 4 shuttlepods[2]
The Defiant-class was a type of Federation starship in use by Starfleet from the 24th century into the 25th century. Although officially designated as an escort, the Defiant ships were the first type of starship Starfleet ever created as a dedicated-purpose warship, and they are sometimes referred to as destroyers. (DS9 episode & novelization: The Search; ST video games: Armada, Armada II)

The Defiant was conceived as Starfleet's first warship in response to the many new threats faced by the Federation in the mid-24th century but primarily the Borg. As more conservative elements of Starfleet began to worry of the Federation encountering hostile societies and the fear it's defenses were antiquated, the need for greater defensive capability was recognized. The vessels were purposed as a compact design, utilizing components typically installed aboard larger starships and packing a great deal of weaponry into a otherwise small, maneuverable ship. As such, many of these vessels were fielded in battle during the Dominion War. The class has a compact warp core that produces enough energy to power a vessel four times its size. (DS9 episode: "Call to Arms"; DS9 reference: Star Trek: Deep Space Nine Technical Manual; ST reference: Starship Spotter)

The Defiant-class was one of many new Starfleet classes developed in response to the Borg threat following Starfleet's tragic losses in the Battle of Wolf 359. The class was the first that Starfleet ever developed purely as a warship—but for years following the Borg's early incursions, the expected invasion never materialized—the prototype USS Defiant spent much of its time in space dock in the Utopia Planitia Fleet Yards. Various design flaws creeped up in the build, namely the ship is overpowered for a ship it's size; structural integrity was insufficient and the vessel nearly tore itself apart at maximum warp. Rising hostilities with the Dominion spurred the Defiant into full service, assigned to Deep Space 9 in 2371 and fitted with a Romulan cloaking device to defend the station from Dominion attack and conduct undercover operations in the Gamma Quadrant. During this operational period, many of the earlier design deficiencies were corrected. In response to rising hostilities from the Dominion, the Borg, the Maquis, the Breen and the Cardassians, the Defiant-class was authorized for production and several more were ordered.

The Star Trek Roleplaying Game Player's Guide contradicts this by stating the the warship design was started in 2366, after the "initial contact" with the Borg.

By the time the situation escalated into full-scale war, several Defiant-class starships had been put into service and had performed admirably. The original USS Defiant was destroyed by a Breen energy dampening weapon in 2375.

Following the Dominion War Starfleet developed a ship based on the lessons of the Defiant-class, the first and so far only vessel of this type, the USS Incursion is fitted with a holographic masking system and is operated by Starfleet Intelligence. (ST video game: Away Team)

Defiant-class vessels crewed 50 officers and crew, with room for a maximum of 150 in evacuation situations. The Defiant vessels weighed 355,000 metric tons, measured 170.68 meters in length, 134.11 meters in width and 30.1 meters in height. The Defiant had a warp core power plant rated at over 1,500 cochrane units in output, feeding two warp nacelles. The warp drive was rated for a maximum output of warp factor 9.982 for 12 hours. The ships of the Defiant-class were also fitted with two impulse engine fusion reactor plants and thrust emitters.

The vessels have ablative armor to absorb enemy weapons fire and were fitted with beam weapons consisting of four pulse phaser cannons, capable of firing from numerous phaser arrays along the hull. Defiant-class ships also are equipped with two launchers, capable of firing either photon torpedoes or quantum torpedoes from numerous emplacements along the hull. In an extreme situation the Defiant-class's nose section, which contained the vessels stock of torpedoes, could be separated as a last resort to act as a large projectile. (DS9 reference: Star Trek: Deep Space Nine Technical Manual)

In official and licensed sources alike, the Defiant is always listed as having four phasers and two torpedo launchers. Onscreen canon evidence has shown that these weapons can be fired from more numerous points along the hull.

The Defiant-class was one of the few classes of Starfleet starships capable of planetary landing and lift-off, and as such, had four sets of landing gear in its ventral hull to facilitate this. (DS9 reference: Star Trek: Deep Space Nine Technical Manual; ST - Tales of the Dominion War short story: "Safe Harbors")

The compact type-10 shuttlecraft was designed alongside the Defiant-class and two can be held in its shuttle bay.

Like other Federation and starfleet ship designs, the Defiant-class was fitted with intercooler systems to cool the warp and impulse engines and the power transfer grid. The plasma intercooler was fitted with safeties which could be taken offline at the discretion of the ship's chief engineer. Both Miles O'Brien and Nog had performed this action, in order to coax better performance from the engines, aboard the USS Defiant and the USS Valiant, respectively. (DS9 episode: "Valiant")

Unlike most or typical Starfleet vessels, the Defiants role as a warship first and foremost disregarded many of the typical leisure, recreational and living amenities enjoyed by other vessels. The Defiant has no holodecks, no lounges or recreation centers, no arboretums; the ships mess hall is small and doubles as an informal meeting venue. Crew quarters are equally sparse with double bunked, everyone on board shares a room with another person except the ships commanding officer. With a crew of typically 50 (though the ship can accommodate as much as 150) the ship has no real provisions for civilians or crew families. The ship has few windows for looking out as such would be a critical weakpoint if attacked. The ship ignores most of the large chain of command layout as well with higher ranking officers doubling in typical ships duty. Officers with ranks as low as Lieutenant commander can hold position of commanding officer.

In the 25th century, the design of the Defiant-class escort allowed its commanding officer to choose from different designs of livery, which could be modified further at starbases. These options were numbered Types, Upgrade and Veteran. (STO - The Klingon War mission: "Welcome to Earth Spacedock") 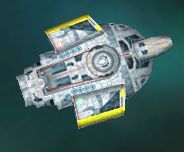 With Borg enhancements but derelict

The USS Defiant first appeared in canon in DS9 episode: "The Search".

Several more previously unheard-of ships of this class were described in unused code that can be decompiled from the software of the video game Legacy. These vessels include the USS MacGoohan, USS Portmeirion, USS Drake, USS Harmony and USS Grainer.